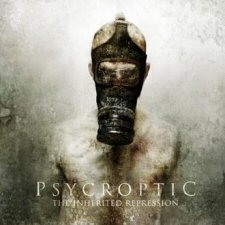 Tassie’s finest do their country proud once more

Has it really been almost four years since the last Psycroptic studio album came across my desk? Wow… talk about “seems like only yesterday”, huh? I mean, surely it wasn’t that long ago that Australia’s premier tech death metal act unleashed the fury of The Scepter of the Ancients – the album that really had metal fans taking note? Hmm, ok so that was 2003 apparently. I guess it has been a while. Anyways, the quartet, who have undergone only a single line-up change since their inception (vocalist Jason Peppiatt replacing Matt Chalk in 2004) have gone from strength to strength over the course of each release and the band’s fifth studio effort, The Inherited Repression, continues the trend.

For a while there it was looking like the technical death metal scene was going to be nothing more than who can play the fastest and most technically as well. Bands such as Decapitated, Anata, Neuraxis, Aborted and Arsis alongside Psycroptic were delivering breakneck speed releases. Soon enough the likes of Psycroptic and Decapitated started to spread their creative wings and push the boundaries of tech death metal to new places. The blistering pace was still there and the technical merit unchanged but groove and tempo started to play a bigger role in things, and for Tasmanian quartet Psycroptic, that started with 2006’s Symbols of Failure. It was furthered with 2008’s Ob(Servant) and it would be correct to expect that these boundaries are further pushed on The Inherited Repression, and they are.

Perhaps more than ever Psycroptic have pushed things even further than before. Joe Haley’s fancy fretwork and flying fingers take centre stage much of the time – just check the brilliance of the opening cut Carriers of the Plague! From the crushing simplicity of riffs to the blistering arpeggio-like runs, when coupled with the furious blasts from kit master and brother Dave Haley, Psycroptic have never sounded more lethal. But that must also be attributed to front-man Jason Peppiatt and his vocal bark steers the group out of the vocal wilderness of generic death metal grunts. Somewhat understandable at times, it has a hardcore edge to it which only adds to the appeal of the nine tracks on offer this time around.

Psycroptic have crafted something pretty special with The Inherited Repression. It’s equally as good as its predecessor but more diverse. Thrashy, intense, groovy, diverse and engaging are just some of the words that can be used to describe this album. If you liked the way the band were heading over the course of their last two releases, then you will absolutely love this one as well. It’s only very early into the new year but I’d go so far as to say that this will be in quite a few “Top 10” lists for 2012. Brilliant!