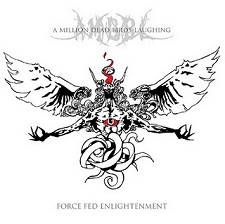 Progressive or experimental Thrash are words often not heard together. I'm not sure if there's any kind of official genre that goes by that name. Maybe it exists in relative obscurity. Thrash metal sprang from the early eighties, and many of its exponents sound like they are still trapped in an 80s timewarp. By its very nature thrash is a non-progressive genre, its unrelentingly fast, gnarly and brutal and few bands break new ground within its limiting parameters.

So when a band does, it makes you sit up and take notice. The music of the strangely named A Million Dead Birds laughing features many of thrash metal's signature attributes: it's regularly played at breakneck speed, interspersed with some big, fat grooves; the songs are ultra short and very much to the point; the vocals are relentlessly screechy and melody-free (aside from the occasional more droney vocal interlude); and the production is enjoyably harsh on the ear. It ain't pretty sounding music. In fact, these guys even stray beyond the realms of thrash into grindier territory at times. But at the same time they inject a quirky progressiveness into their sound that really begins to set them apart from the thrashy/grindy crowd.

It's obvious that quite a large amount of effort has been put into giving the songs some strong, individual flavour and character, despite the brevity of the songs and inherent nastiness of the material. They pack more than enough off kilter, flat knacker rhythms and idiosyncratic vocal lines in to one to two minute songs to seriously maintain the interest, where a more traditional thrash/grind approach may have become rather tedious and un-dynamic.

The musicianship is as fast, precise and powerful as you'd expect in this kind of music. Ultimately, with the level of skill on display here, these guys could probably take their sound significantly further into the directions that they've begun exploring on this, their debut album, on their next record. And then charter some different musical terrain from there. Maybe wind their songs out by a minute or two and throw some different type of soundscapes into the mix. It would make their sound even more interesting than it already is.

Ultimately though, this is an enjoyable and audacious debut from these Melbourne boys. The door is open for these guys to go in any direction they want, and if they manage to stick together, following their career could make for fascinating listening.