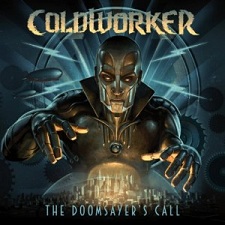 Way back in 2006, when hearing Coldworker's debut, a lot of people would find it hard to believe that these Swedish death metallers have come so far to where they are today. Back on their debut the music was chugging, catchy, and riding the deathcore train when it really had just started taking off. However, more seasoned listeners felt it was dry, over used, and just another generic release.

Since then, the band has been hard refining their sound to a more raw, crushing death metal version that is still chug happy, but emulates groups like Immolation or older Incantation- slow and steady but still highly enjoyable with technical moments. 'The Doomsayer's Call' is the group's latest effort that solidifies their place in death metal.

Most of the tracks are chug heavy such as "Murderous" and simply even paced on all fronts, even the vocals. Some might argue against this and say the vocals are a bit one sided as they keep the same monotone growl, but they are at least the middle of the road- not being too guttural or too high pitched.

Other tracks like "Fleshworld" are a bit more technical with the 'stop n' go' pace of the music rather than just being straightforward all the way through. Layered guitars have that Cannibal Corpse buzz to them while refraining from being overly fast mixed with bursts of sharper melodies, especially during the solo right before the chug fest. "The Glass Envelope" is a bit faster- partially due to the drums- and definitely touches more upon the Immolation side in the way the riffs are structured. "The Walls of Eryx" is certainly special because it almost touches on melodic death metal in a way that the other tracks don't, from the opening churning riffs to the slow, even pace that makes this one of the slower, more rhythmic tracks on the album with well placed pauses; the only downside is the riffs are rather repetitive. Still, little moments like these may herald back to Coldworker's debut, but overall one can definitely say they have improved since then. The vocals could use a little bit more variety, but the entire mid range approach by the band is a good way not to step on any toes as they make their way the progress to the top. However, to avoid poor repetition, they may have to change their game up a bit in the future to keep fans interested. They got away with this style for the past two albums, but to do it for three will be a bit of a stretch.