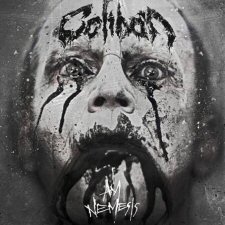 A heavier step up on previous releases

To me, Caliban always sounded like a poor man’s Killswitch Engage. Everything about their material up until recent times sounded like a carbon copy of whatever Killswitch were doing at the time, even if whatever Killswitch was doing was just rehashing their best moments (all of the albums that followed 2004’s The End of Heartache, essentially). So take that level of mediocrity and then dumb it down a notch and that was my view of Caliban really. But, like cockroaches, they manage to survive everything and with I Am Nemesis, the band’s eighth album, they have managed to finally rid themselves of all of the Killswitch-isms and are now fully entrenched in today’s version of the metalcore sound.

Andreas Dörner’s clean vocals dominate the album as he screams and growls his way across the band’s heavy aural landscape that twists and turns from breakdowns backed with thunderous bass hits to faster, more chord driven passages. Add Denis Schmidt’s trademark clean vocals and some subtle keyboard work and it’s apparent that Caliban 2012 is slotted clearly within what other metalcore acts are doing now as well. Perhaps this change-up is the company they have been keeping. On their latest release, vocalists from Heaven Shall Burn (Mark Bishoff) and Suicide Silence (Mitch Lucker) make appearances. Now, Heaven Shall Burn are no strangers to Caliban but the likes of Suicide Silence is a new influence that I think can clearly be heard on I Am Nemesis. There’s a clear shift towards metalcore 2012 and away from metalcore 2006 for sure.

What does this mean then? Well, in a nutshell it’s more breakdowns, more chugging and bouncing riffs, and a clear shift away from dominating clean vocals. In short, they are moving in the direction of heavier material once more and that is evident from the riffs – be it lightning fast or crushingly heavy and slow – and the general brutal vibe each of the dozen tracks on I Am Nemesis offer. Fans of Suicide Silence, I Killed the Prom Queen or any other of the gazillion bands that share that similar sound and style will no doubt be karate kicking their way around their bedrooms with excitement when listening to this new release from this long standing German group. To Caliban’s credit, they have managed to stay true to their chosen style at the grassroots level. They have simply shifted things around to not quite reinvent themselves but more correctly, make themselves more interesting at least and probably more importantly, more relevant to today’s metalcore style.

However, the end result though is one you’ve heard before and that is where Caliban usually end up. I’ll be honest in saying that I don’t know who the current leaders of the metalcore scene are but whoever it is these days, I guarantee that Caliban will be followers, and not one of those leaders. I Am Nemesis is a step up and a step in the right direction, but once again, Caliban are a few steps behind the leaders. I guess that will always be the case with these guys.