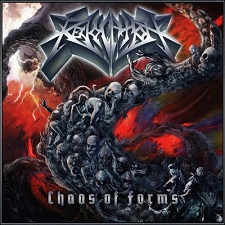 So close to classic, but short nonetheless

Over the last six years, Boston (Massachusetts, U.S.) based outfit Revocation have gone from strength to strength, with their second full-length effort Existence is Futile (excluding 2005’s Sanity’s Aberration release when the band were known as Cryptic Warning) hailed as one of the better releases to emerge in 2009, and some going as far as to say that the band could well be the next major thrash metal breakthrough within the current thrash movement.

Now returning with their all important third full-length release Chaos of Forms, Revocation (who now comprise vocalists/guitarists David Davidson and newcomer Dan Gargiulo (ex-Cyanide Brain/Artificial Brain), bassist/vocalist Anthony Buda and drummer Phil Dubois-Coyne) have managed to put together another first class release, even if it falls a little short of the high standard set with their former release.

The thing that really makes Revocation stand out from the countless acts within the current New Wave of Thrash Metal movement is the band’s ability to blend technical death metal and old school thrash with almost everything else you could possibly think of genre wise under the sun - without making it sound like a complete mess. At times, it’s near impossible to pin down Revocation in genre terms, but then that’s what separates the followers from the leaders. And don’t be mistaken here - Revocation is one of the thrash metal scene’s definite leaders.

Revocation get the album underway with the short Cretin, which not unlike the opening track on the band’s former releases, is a bewildering display of technical riffing, speed and time changes that are right up there with any of the leaders in the technical challenging metal genre. The blues inspired solo is a cool touch, and adds a little something different from what you would expect, and helps make the song stand out right from the start.

The follow-up track Cradle Robber is typically oddball like with its infectious gang vocals and Megadeth-like riff structures and stunning guitar tradeoffs, while tracks such as Dissolution Ritual, The Watchers (which features some great Hammond keyboard work!) and Dethroned (which has some great acoustic work amongst the heavy riffing) lean more towards the progressive side of the band’s song writing - all the while maintaining a distinct thrash style throughout.

In terms of straight forward aggression, it’s hard to go past the savage brutality of Harlot, Beloved Horrifier and the technically inclined title track Chaos of Forms, while Reprogrammed manages to bludgeon whatever remains of the listener at the tail end of the album with its unbridled venom.

Unfortunately, not everything works. Despite some initial promise, the melodic blackened entity that is Conjuring the Cataclysm fails to live up to its epic premise, while No Funeral and the short instrumental piece Fractal Entity just don’t quite connect in the same way most of the other tracks do.

While Chaos of Forms is a great album, it’s not quite up there with the likes of Existence Is Futile in terms of overall consistency. But given that Revocation are somewhat of an oddity within the current thrash movement with their experimental and daring sounds, Chaos of Forms is still firmly miles ahead of the competition.