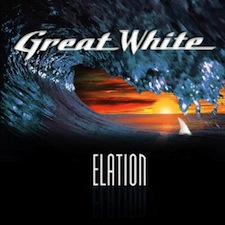 Elation's first track "(I've Got) Something for You" begins with a rapid drumming intro and a real driving rhythm that lasts throughout the song--which is about a one-night stand. It maintains Great White's classic bluesy sound with an added '60s or '70s rock vibe, and Terry Ilous's vocals mesh really well right from the start.

The following song "Feelin' So Much Better" is quite a bit heavier than the first track. The vocals, especially the backing vocals, sound very much "80s"--but with a modern twist. The guitar solo, with it's killer sustain, is fantastic!

Another hard rocker with the '80s feel is "Just for Tonight." It features a heavy bass line, especially in the chorus. The vocals are quite sexy, especially the lyric of "lay down just for tonight"--which is sung with a lot of attitude. This track also has a the modern sound, but I could still imagine it having an '80s style video, complete with a "video vixen."

The very blues-based "Love Train" is definitely not a cover of the soul classic! Great White's "Love Train," which is heavy on the harmonica, evokes an image of an old southern railroad. I instantly enjoyed the down and dirty groove that accompanies the "welcome to the love train" lyric in the backing vocals.

"Hard to Say Goodbye" is Elation's first ballad. It features the acoustic guitar, and I absolutely love how the intense and emotional vocals contrast with the softer vocals in many parts of the song. The guitar solo is highly electric, and the mellow backing vocals at the end add a nice touch.

"Lowdown" really struck me as interesting. The intro riff is full of a heavy and low guitar and bass sound. It is almost as if it sounds like metal and blues all at these same time. This track, which is about a cheating wife or girlfriend, has some intense bluesy vocals and has a killer distorted hard rock guitar solo.

Elation is an enjoyable hard rock album. Great White has really stuck to their blues-based roots with this one. It contains a great mixture of upbeat rocking songs and acoustic ballads. Because Great White is known almost exclusively as an "80s band," I didn't really know what to expect from this 2012 album. However, I am quite impressed with it! It does not sound dated in the least, and I really think Terry Ilous is a great fit for the band. Elation is not what I would call "metal", but it does have some "hard and fast" moments that blues-loving metal fans are bound to appreciate.