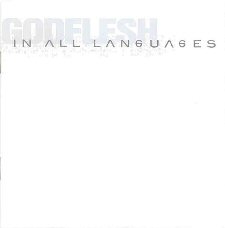 A fitting end to an amazing band

Flesh Of God, which is the title of the first CD in this release, features 15 tracks of that trademark Godflesh sound – droning guitars, powerful yet sometimes trance-like vocals backed by solid rhythmic beats. There really are no surprises in the tracks here for old fans, but the selection itself shows how this band progressed whilst remaining original and ground breaking through out their career. The second CD, Beyond The Flesh, contains rarer tracks such as Love Is A Dog From Hell from the very hard to find 1989 Pathological Compilation from Pathological Records, as well as two new remixes of the tracks Witchhunt and Us & Them.

A good best of compilation album for any artist, is something that will appeal to hardcore fans, as well as something that would be a good introduction to a band for those who know their name but aren't familiar with their music as such. In All Languages satisfies both.