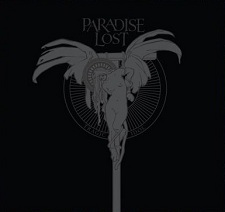 Although Paradise Lost never really disappeared, few would deny that since the long running U.K. based gothic rock/metal outfit signed to Century Media Records in 2007, the band have been enjoying a renaissance of sorts, with their last couple of album’s hailed as the strongest releases to emerge from the band is some years.

Three years after the release of Faith Divides Us - Death Unites Us, Paradise Lost has finally returned with their 13th studio outing, Tragic Idol, and true to the band’s recent form, the album is another sterling effort from a band that is well and truly at the top of their game.

In the lead up to the release of Tragic Idol, songwriter/lead guitarist Gregor Mackintosh likened the sound and direction heard on Tragic Idol to their classic efforts Icon (1993) and Draconian Times (1995). And when you take into account Mackintosh’s recent foray into his death metal past with his solo project Vallenfyre (who released their debut effort A Fragile King in 2011), the news obviously had many hoping that Paradise Lost were making a determined effort to make an album that rivalled their critically acclaimed classics of the formative years.

Well, there’s no doubt that Tragic Idol does bear some similarities to the above mentioned albums, as the band’s latest effort is undoubtedly the heaviest sounding effort they have produced in years but Tragic Idol is far from the kind of album that mimics their past sound. There are still plenty of the band’s trademark melodies of their more recent past contained throughout the album, and vocalist/lyricist Nick Holmes hasn’t completely abandoned his clean vocals just yet. No, if anything, Tragic Idol is a natural continuation of where their last album left things, but with an added dimension of grimness thematically and a heavier sound to reflect the band’s progress forward.

Paradise Lost open up the album with the slower paced and doom-like Solitary One which is one of the few tracks to feature keyboards high in the mix and a greater emphasis on melodic structure and clean sung choruses from Holmes. The song itself is a strong opener, and effective as a transitional track that bridges the sound heard on the band’s last release, and the sound that can be heard on their latest effort on the album’s first single, Crucify.

Crucify is one heavy number, and best showcases the role the guitarists play on Tragic Idol as a whole. Although Holmes adds a much needed melodic edge through his growled vocals, it’s the guitarists that really dominate here – and it works exceedingly well.

The cleverly titled Fear of Impending Hell is a broody track that features some outstanding vocals from Holmes on the choruses, while the guitar driven crunch heard on Honesty in Death, the title track Tragic Idol (which boasts another inspired performance from Holmes) and the powerful Worth Fighting For are noteworthy slower paced efforts dotted throughout the album.

Theories from Another World is an absolutely crushing track that combines speed, tribal drums and a genuine sense of theatrics in a way that is different from what you would expect from the band, while the excellent riff driven In This We Dwell and the nihilistic To the Darkness are efforts from the band determined to inject a heavier edge into their sound – with great results. Finishing up the album is The Glorious End, which is suitably miserable and funeral march paced, but epic nonetheless.

This is a review for the limited edition version of Tragic Idol which comes with the addition of two bonus tracks on a separate disc. The first is Ending Through Changes, which is a great track that is every bit as epic as the album closer, but far more melodic and atmospheric. The only reason it wasn’t included on the album that I can surmise is that it’s more along the lines of the material from Faith Divides Us - Death Unites Us.

The second song on the second disc is the band’s take on Spear of Destiny’s hit single Never Take Me Alive (which originally appeared on their 1987 album Outland). I was never a fan of the original, so I wasn’t expecting much from Paradise Lost’s version but, to my surprise, this version is an absolute gem, with the added musical atmospherics and Holmes’ vocals giving the song a whole new facelift. This track alone warrants picking up the limited edition of Tragic Idol.

As far as I’m concerned, Paradise Lost has never produced a sub-par album. And while I’m not completely sold on the thick sound of their latest release (courtesy of producer/mixer Jens Bogren), Tragic Idol is another first class release from the Halifax based legends.