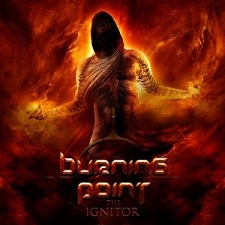 Burning Point are running hot with latest album, ‘The Ignitor’

When thinking of another CD to review this month and I was coming up a bit short, I remembered someone mentioned that Burning Point has a new disc called ‘The Ignitor’. Burning Point? No offence to the band, but I thought they had broken up years ago. I remember listening to their first two releases and not thinking much of them, thus never giving them another thought. That was way back in 2003. Now I realise that Burning Point are still around, so why not check them out nine years after I had forgotten about them. I’m glad I did.

As it turns out, Finland’s Burning Point got into some legal troubles with their label Limb Music after the release of their second disc ‘Feeding the Flames’ in 2003; the end result was losing their record deal. In 2006 the band was signed by Metal Heaven Records and in 2007 and 2009 saw the CDs ‘Burned Down the Enemy’ and ‘Empyre’ released respectively. The record deal must have ended at that point as in October 2011, Burning point independently released a demo. The demo made its way into the hands of Scarlet Records, who signed them up straight away. All six songs on the demo appear on the latest album ‘The Ignitor’, which I must say is a damn fine, one hell of a great CD.

Burning Point consists of guitarist Pekka Kolivuori, drummer/keyboardist Jussi Ontero (he played keyboards only from 2003-2008), bassist Jukka Jokikokko and vocalist/guitarist Pete Ahonen; who is the only remaining original member of the band. Ex-keyboardist Pasi Hiltula left the band in 2011, thus the reason why Jussi performs both the drums and keyboards on the latest album. Burning Point’s metal sound can be slotted nicely into that mammoth sub-category we call melodic power metal, and draw comparisons to other bands such as At Vance, Majesty, Dream Evil, Bloodbound, Angel Dust, Messiah’s Kiss, (early) Steel Attack, Cryonic Temple, Nostradameus, Power Quest, Masterplan, Silent Force and the list goes on...

Now, Burning Point’s sound on ‘The Ignitor’ is every melodic power metal fan’s dream and definitely a CD that all melodic power metal fans should hunt down very quickly. You have your typical power metal related lyrics (nothing too deep and meaningful), with loads of powerful but harmonic vocals, blasting drumming and tons of heavy riffs, rips, chords and solos that you can raise your first, tap your foot or bang your head to (maybe all three). For the air guitar enthusiasts, it’s your lucky day as you’ll be kept busy for the entire 44 minutes that the disc goes for.

I must say my jaw dropped when I heard this new album, as I was still labelling Burning Point an average band from back when I first heard them nine years ago. Not having heard any of their other CDs (yet) after ‘Feeding the Flames’, I cannot compare their sound on ‘The Ignitor’ than two their previous discs and how quickly or slowly they have improved. All I can say is that this new album kicks major ass and that’s all that matters.

There are plenty of examples to choose from to back up that statement, including the blistering “In the Fires of My Self-Made Hell”. A powerful riff and war cry from Pete Ahonen starts the track off with tantalising speed and fury. Aside from being a catchy song (especially during the chorus) and quite memorable, there are supreme riffs and a cracking solo from Pekka Kolivuori, who is an underrated axeman IMO. The final track on the disc is another winner, “Holier Than Thou” (no, not a Metallica cover), a speedy and high octane melodic track which really shows off the vocal talents of Ahonen, who has a perfect voice for melodic power metal. Ahonen’s delivery is flawless; while his range and pitch levels are extraordinary. Ahonen has a slightly raspy voice which brings aggression when he sings in the normal to mid-levels; however he can reach the high notes and upper echelons with absolute ease.

There are plenty more spirited and heavy tracks on this disc that will make you stand up and notice. These songs include the catchy, melodic and 80’s tinged “In the Night” and “Demon Inside You”, plus the fist pumping, sing-a-long metal hymn “Lost Tribe”, in which Manowar would nod their heads in approval. Lastly, there is the energetic and keyboard-laden “Everdream” and “Heaven is Hell”, and also the opening track to the CD, the lightning quick shred-fest that is “Eternal Flame (Salvation by Fire Part II).

Being in the huge category of melodic power metal, there is nothing new or fresh-sounding to be found here, but that’s expected these days considering the size and restrictions of the genre. A fan of melodic power metal isn’t looking for an album that is new or fresh, just something that has plenty of wicked guitar riffs and solos, catchy harmonies and melodies and a vocalist who has a vast range and powerful delivery. You just wanna enjoy the songs and Burning Point’s ‘The Ignitor’ has all that and yet despite its simplicity; if it sounds good and appeals to the listener, then it works. Hearing this release now compared to Burning Point’s first few discs, there has been a massive amount of improvement, and hit me completely by surprise, as I anticipated something fairly average. This is not the case, so if you are a fan of any of the bands mentioned earlier in this review, then Burning Point should be a band you need to be tracking down. ‘The Ignitor’: well inside the top 10 melodic power metal releases for 2012.