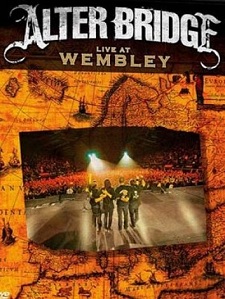 Reaffirmation of their status as one of hard rock’s best

Florida based outfit Alter Bridge are without a doubt one of the biggest acts within today’s modern rock scene, with the band’s three full-length releases all garnishing overwhelming critical acclaim and going on to become huge commercial successes. Given the band’s ongoing success both on the studio front and on the road, Alter Bridge have decided the time was right to put together another long awaited second live D.V.D. release to showcase just how far the band have come since the release of Live From Amsterdam way back in 2009.

Recorded at the band’s largest headlining show at Wembley Arena in London (U.K.) on November 29th 2011, Live at Wembley lives up to Alter Bridge’s reputation as a must see live act.

With virtually no fanfare, the concert immediately gets underway with the excellent Slip To The Void – the opening track from their last studio effort ABIII (2010). Vocalist/guitarist Myles Kennedy delivers the song’s moody introduction with perfection, while the rest of the band (comprising of guitarist/backing vocalist Mark Tremonti, bassist Brian Marshall and drummer Scott Phillips) sound damn near flawless when they eventually kick in on the heavier body of the track. Right from the start, it’s clear that Alter Bridge is in top form with their performance throughout the 22 track set-list (running for a touch under two hours in total), which isn’t all that surprising given the band had spent five weeks leading up to this performance playing throughout Europe.

In terms of the visuals, director Daniel E. Catullo III (who has previously helmed live D.V.D.’s for Rush, The Smashing Pumpkins, Chickenfoot, Creed, The Cult, Godsmack and Alter Bridge’s Live from Amsterdam) has really put together something special, with the 16 high definition cameras, the laser lightshow and sparingly used pyrotechnics used to great effect. And when you couple that with a killer live performance from the band and a very vocal ten-thousand strong audience made of fans, it’s hard to find any serious faults with Live at Wembley.

In terms of highlights, again it’s hard to find a song throughout the show that doesn’t stand up to expectations, but numbers that do stand out include Ghost of Days Gone By, Metalingus, crowd favourite Blackbird (which is ingeniously introduced via a brief cover of the Beatles track by the same name), Kennedy’s acoustic performances of Wonderful Life and Watch Over You and the hard and fast Ties That Bind.

Also worthy of a mention is the brief jazz/rock ‘n’ roll intro that eventually leads into the heavy Isolation (which showcases the band’s sense of humour, and Kennedy’s own skills as guitarist) and the shredding duelling trade off guitar solos between Kennedy and Tremonti that precede the closer Rise Today.

In terms of extras, Live at Wembley also comes with the sound track of the show on C.D., which unfortunately only features fourteen cuts from the show rather than the whole thing.

Faring better is the accompanying D.V.D., which features the 55 minute long documentary, Road to Wembley. Through interviews with all band members and various members of their crew and management, the documentary quickly covers the history of the band before settling on detailing the events taking place on their tour of Europe, through to the grand finale – a headlining show at Wembley Arena. The interviews are insightful, humorous and informative (especially those of Kennedy’s), and the footage is fast moving, making it a real bonus worth watching. Aside from the documentary, there’s the obligatory photo gallery (Featuring around 110 shots) and a two minute preview of the upcoming 3D version of Live at Wembley (which really is filler).

As mentioned earlier, it’s hard to find any serious faults with Live at Wembley. But that doesn’t mean that there aren’t some niggling issues. Kennedy’s not partial to the odd use of profanity onstage, as evident on the D.V.D. I generally don’t have an issue with that, but there are times when it sounds a little too forced and out of place, which is a real shame.

Another issue I have is the set-list. Given it was only three years since their last D.V.D., it would have been great to see a track selection that focussed more on different tracks/b-sides to separate the two releases a little more, and to make the set-list a little more interesting for fans. And as for the speeding up of tempos on some of the tracks, sometimes it’s hardly noticeable – but when it is, it makes the songs sound unnecessarily rushed.

Aside from some small quibbles, Live at Wembley is a great live release, and one that reaffirms Alter Bridge’s place as one of hard rock’s undisputed kings at the top of their game.