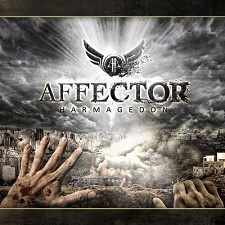 For progressive rock/metal fans, Affector is nothing short of a supergroup and, with that tag, many will have a fair amount of expectation from this debut effort. Thankfully, the band delivers exactly what’s expected from them given line-up involved in such a project.

The album starts off with the short symphonic instrumental piece Overture Pt. 1 – Introduction (which is performed by Polish orchestra Sinfonietta Consonus), which then quickly moves into Overture Pt. 2 – Prologue, which combines the orchestra with the band themselves. The duality of the two tracks work quite well (one symphonic, the other more a progressive metal sounding), and the lead guitar work from Fries is exceptional on the latter.

It isn’t until Salvation that we finally get a real idea of what Affector sound like outside purely instrumental tracks, and essentially they sound like the stronger elements of Symphony X, Dream Theater and a hint of Enchant all rolled up into a huge progressive rock/metal sound. It’s been a long time since Leonard has fronted a band, and his return here is a welcome one. His melodies are first class, and even though the music behind him is a little more aggressive to what we ever heard on the Enchant front, he manages to make a mark. On the guitar front, Fries absolutely shreds with blinding technicality without going too over the top, while the waves of keyboards dotted throughout the track are well placed and executed.

Clocking in at a lengthy 14 minutes, The Rapture is obviously the big epic at the halfway mark of the album and, as expected, is one of the album’s real highlights. The fast pacing, combined with distinctive riffs and melodic leads, orchestral fills (again, supplied by Sinfonietta Consonus) and rich keyboard underpinning throughout help create a truly epic track that’s near impossible to fault, and a definite highlight on the album.

The mellow and slower paced Cry Song is something that wouldn’t have sounded too out of place on an Enchant release, but different enough to stand apart, while Falling Away & The Rise of the Beast is another up-tempo melodic piece of progressive rock that boasts some great melodies from Leonard and some stand out keyboard solos from both Morse and Sherinian.

The title track Harmagedon is again another thirteen minute epic slotted in the latter half of the album, and by far one of the album’s heaviest tracks, and a personal favourite. Fries absolutely shreds throughout this track, and proves that while he is a virtual unknown up until this point, his place amongst the other big names in the line-up has been well earned. Finishing up the album is New Jerusalem, which is a rather melodic track in the vein of Enchant, but with a little more guitar thrown into the mix to beef things up.

Supergroups for the most part seem to let down more than they impress. But if truth be told, Affector is the exception. While the conceptual story within the lyrics leans a little too much towards the religious side of things (which is not surprising given the album is based on the Biblical apocalypse), the music more than manages to impress enough to overlook the story contained within.

The line-up within Affector will ensure there’s no shortage of fans that’ll quickly pick this up without a second thought. And so they should. Harmagedon is a worthy effort.