Brant Bjork And The Bros 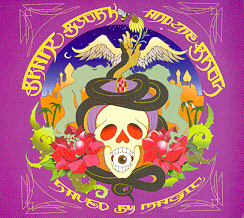 Californian psychedelic desert rock guitar/vocal legend Brant Bjork (Who has in his time been a member of Kyuss, Fu Manchu, Ché, as well involving himself in the ongoing eclectic Desert Sessions series) is back once again to serve up another slab of '70's inspired stoner rock. Unlike his previous solo efforts (1999's Jalamanta, 2002's Brant Bjork & The Operators, 2003's Keep Your Cool and 2004's Local Angel), Bjork has decided to allow his live backing band The Bros (Who consist of guitarist Cortez, bassist Dylan Roche and drummer Mike Peffer) to follow him into the studio, which has resulted in his latest mammoth double album effort Saved By Magic.

While Bjork's musical direction has been somewhat laid back and unassuming, he's finally decided to return to his rock roots (Along with the help of The Bros) with his heaviest (And most guitar orientated) release since Ché's Sounds Of Liberation (Which was way back in 2000). Over the course of twenty tracks (Close to ninety minutes in running length), Bjork and The Bros deliver lo-fi rock with plenty of psychedelic tones infused with the '70's like groove, with Get Into It (Preceded by the stormy introduction piece Magic Vs. Technology) full of Bjork's strangely hypnotic and characteristic monotone vocals working effectively over a minimalist funky backbeat. Keeping up the breezy carefree feel on the first disc are tracks such as '73, Kiss Away and Moda, while the souped up pair of Lil' Bro and Dr. Aura, and the disorientating Gonna Make The Pony Trot (Featuring barely audible subliminal backing vocals) stand out as the strongest cuts.

On the second disc, the experimentation continues with the bizarre sound effect laden Freak Levels, while the AC/DC riffed Let The Truth Be Known brings things back to sober levels. Elsewhere, Fatso Jetson guitarist Mario Lalli (Whom Bjork has played with from time to time) helps add extra dimensions to Sweet Maria's Dreams and the spoken word/semi-autobiographical piece Avenida De La RevoluciÃ³n, while the simplistic approach of The Messengers and Arcade Eyes work nicely to counteract the somewhat disturbing work out of Paradise On Earth. Surprisingly, it's the covers (Cream's Sunshine Of Your Love and the uncredited Rolling Stones classic 2,000 Man) that are the albums most predictable and uninspired moments.

Although a little over ambitious as a double album (Unless you're in the (Stoned) mood, the album does tend to have it's dull filler moments), by and large, Saved By Magic is a long overdue and glorious return of the Brant Bjork's more rocking side to his sound.