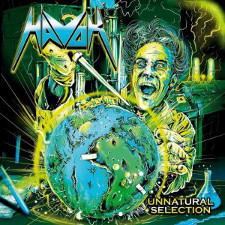 Chasing the edge and coming up short...

Colorado (U.S.A.) thrashers Havok have been around for a few years now but it really was their sophomore effort, 2011’s Time is Up, that really brought the quartet to the attention of the metal masses. They’ve had a couple of EPs and the long player, 2009’s Burn, sure but they really didn’t garner a lot of attention for the band. Everything clicked when it came to Time is Up and it received a shit tonne of critical acclaim; rightly so, too. It’s an absolute cracker of an album and I’d think it would be somewhat of a relief for their label, England’s Candlelight Records, that things started to really move forward for the group.

Now, it’s no secret that I love thrash. I was one of those who rated Time is Up so highly. Everything about that album works – quality thrashtastic songs, killer riffs, blistering leads, Dave Sanchez’s excellent vocal delivery all backed by an amazing rhythm section. Time is Up is a stellar example of modern day thrash, pure and simple. Of course with that kind of praise heaped on the album, it certainly puts pressure on the band when it comes time to following up with something new.

From the opening moments of album number three, it’s business as usual for Havok. Thrashing riffs, pummelling drums, Sanchez’s barking vocals – it’s all there as you’d expect. But things are definitely different this time around. The songs themselves are not uncontrollable juggernauts that we heard on Time is Up. Previously, Havok would ensure that most of the songs on an album were fast paced from start to finish. Speed – flat out, blinding tempos – played a very big part of what made Time is Up so damn good. Speed, combined with well written riffs and hooks, made just about every song on the album a winner.

Unnatural Selection is a little more restrained. Sure, it thrashes at times and there are some solid head banging moments on here. The riffs are there but they aren’t the total face shredders we’ve heard in the past. The general tempo of songs has dropped as well over all. Add all this up and this combination changes the feel of the album totally. You could call it more mature I guess. I’m not sure. Alternatively, it’s not quite up to the undeniably high standard set by its predecessor.

Adding a little more confusion to this is the generally flat and lifeless production. Now, I’m not talking drums in a 40 gallon drum a-la St. Anger sound. It’s nothing that atrocious at all. But if you compare it to the big, bright and full sound of Time is Up, Unnatural Selection is drier. It’s not dry and scooped like Metallica’s ...And Justice for All. But it is noticeably flatter sonically this time around.

Some of the tracks really fall short of the mark though. Sanchez’s Dave Mustaine like vocals on Waste of Life grate on me every time I hear them. It just doesn’t fit. Worse than War is very much a non-event, with the exception of the last minute and a half. Others just seem to go about their business not really engaging my attention as much as they should. They might not be bad songs – they are certainly not stinkers. They just aren’t great songs.

In fairness, there are a handful of tracks on Unnatural Selection that deliver the goods. The opening one-two punch of I Am the State and the lead single Give Me Liberty...Or Give Me Death continues on from Time is Up and the band’s EP, The Point of No Return. Their cover of Sabbath’s classic Children of the Grave is bloody good, too. The title track rounds things out in fine thrashing form too which most definitely leaves the album finishing on a high. But it’s not enough to save the album. I had high hopes for this based on the band’s catalogue including their EPs, but Unnatural Selection just doesn’t measure up. It’s disappointing that they didn’t nail it this time around. There’s a bit too much filler on Unnatural Selection to chalk this one up as nothing more than above average.