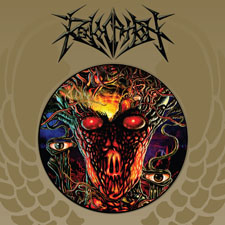 This is a band on a mission

For any heavy metal fan unfamiliar with Revocation, this is a band of four very talented musicians who let loose a real assortment of brutish goodies for you to sink your horns into. With a smorgasbord of influences on show, the Boston - Massachusetts quartet follow up on the successful Chaos of Forms (2011) with this very impressive self-titled release.

Turn the volume up on this one and get ready for a punishing 47 minutes of everything from thrash, technical death metal, deathcore, a bit of grindcore, and some great proggy moments too. Revocation is a band on a mission and not even a significant change-up in personnel is something to break their stride. Bassist and founding member Anthony Buda decided to leave the band in April of 2012 to pursue his passion for pop music and was replaced by Brett Bamberger. David Davidson continues to front the band on vocals and guitar, together with Phil Dubois-Coyne (drums) and Dan Gargiulo (guitar).

‘The Hive’ is a killer opening track and sets the bar for how good Revocation really can be. Neck-breaking thrash set off against Davidson’s staunch death metal growls and brutal grind-esque breakdowns. Is this to suggest that Revocation is at their best when sticking to more to the thrash and technical side of their brand of music? Well, when they bring more of a deathcore vibe to the fore they end up sounding a lot like other bands doing similar things.

‘Scattering the Flock’ and ‘Archfriend’, for example, are both very solid tracks but don’t reflect the degree of diversity that Revocation is capable of. There is familiarity inherent within these types of songs but, ‘Numbing Agents’ on the other hand, shifts back into that frenetic pocket of speed and gritty attitude making for another highlight on this album. And to a similar extent, ‘Invidious’ takes thrash to more contemporary and technical heights with devastating effect. There are echoes of Exodus militancy here but with crushing modern authority.

There’s more. Revocation also dishes out crisp rhythm and melody. ‘Fracked’ and ‘The Gift You Gave’ are slightly slower in tempo but packed full of thick riffs, sturdy percussion and more melodious work on guitar. ‘Spastic’ is a little out of place but, as a purely instrumental number, showcases mindboggling skill and song writing ability.

Revocation is, undoubtedly, destined for great things. The Deluxe Edition of this album includes a cover of Metallica’s ‘Dyer’s Eve’ and hopefully tributes like this are a sign that Revocation will stick firmly to bringing more of their brand of brutal thrash metal to us in the future.