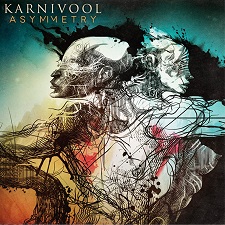 Australia's Karnivool creates a rock laboratory with their latest project

Four years after Sound Awake, the Perth prog rockers have released Asymmetry. With their experimental approach, Karnivool continues to hone a sound that is anything but easy to define.

Asymmentry begins with the instrumental "Aum". It is slow and features a heavy, resonating bass line which is accompanied by guitar feedback and ambient noise. Parts of it almost have a '60s sci-fi sound, like something on a spaceship winding up. It does end with some vocals, but nothing comprehensible--just some faint oohs and ahhs.

Immediately following "Aum" is "Nachash". Jon Stockman's bass playing has the same heaviness with some added thumping. The intro is very fuzzy, and Ian Kenny's vocals start out as monotone. The singing becomes more melodic as the song shifts to a more conventional hard rock feel in some spots. "Nachash" is quite a dynamic track, as it constantly switches between hard and heavy to soft and quiet.

"We Are" is Asymmetry's lead single, which there is a music video for. The heavy thumping bass is especially prominent on this track, and the vocals are very melodic. I also find something strangely U2-ish about this song. The sounds are subtle, but the lyrics hint at a message of social consciousness. "We Are" contains a brief distorted guitar solo that is fairly impressive, and the vocals at the end have a really cool sounding harmony as the music fades out.

Near the middle of Asymmetry is the seven minute mammoth "Aeons". It begins with some electronic sounds that are reminiscent of a 1980s Atari game. It is consistently slow, yet heavy, but the melodies vary. Some memorable moments are the lyric "It's your funeral / it's your dying day" and the Bono-esque vocals on the "When I breathe again..." lines. "Aeons" takes on a modern alt rock feel during the bridge with the climactic "Chemical fires will signal we're dead" refrain. The song keeps building up--until it abruptly ends with more electronic sounds.

"Asymmetry" is the very short and mostly instrumental title track. It predominately features a certain super repetitive and almost grating sound. A distorted guitar joins in, giving the song a more bearable rock feel. It ends with pounding percussion and some indecipherable vocals as it explodes with a static sound--leading right into the musically unrelated "Eidolon".

"Eidolon" is my favorite track from Karnivool's Asymmetry. It sounds pretty much like a typical alt rock song, and it is probably the most "regular" sounding and least experimental rock song on the album. I have nothing against experimentation, but I am just really drawn to this song. "Eidolon" does have its heavy moments, and the chorus is catchy with some repetition. Something else that may be worth mentioning is that the end randomly sounds like the beginning of "Running With the Devil" by Van Halen.

"Float" is the appropriately named ethereal song near the album's end. It is relaxing and calm, and the vocals are soothing. The melody is absolutely hauntingly beautiful. The end features some choral-style chanting followed by a high-pitched "nails on a chalkboard" type sound. That was slightly disappointing, because it seemed to take away from an otherwise purely pleasant song. Any of the other electronic or distorted effects--whether subtle or obvious--on this album sound very deliberate, so I accept whatever reason Karnivool had behind placing it there.

The final track on Asymmetry is "Om". It starts out with piano and some other subtler sounds. About a minute and a half into the song, a crackly old-sounding speech begins to play. It is about death and other dimensions. I actually Googled some of the dialog and discovered it to be a philosopher named Gerald Heard describing the effects of LSD. In the same video about LSD research, there is a woman experimenting with LSD who may sound quite familiar to rock audiences. A sample of her speaking was used in the intro to Rob Zombie's Venomous Rat Regeneration Vendor album earlier this year. As the drug related talking on "Om" ends, the music fades out with a whirring sound, and the lengthy 67 minute album is finally over.

Karnivool's album Asymmetry is undoubtedly experimental, yet it does include some good hard rock moments. It's certainly heavy, but not in the typical metal fashion. It boasts some beautiful melodic moments, especially with Ian Kenny's vocals on the outstanding tracks "Eidolon" and "Float". Asymmetry may be not for everyone, especially those who are not used to prog rock or musical experimentation. As a more traditional rock and metal fan personally, I find that listening to this album with an open mind will definitely make it a more pleasurable experience.