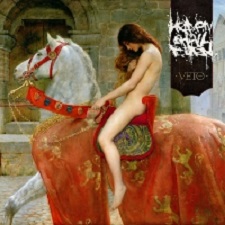 Within the European melodic death metal/metalcore scene, Heaven Shall Burn are without any doubt the leaders. Over the course of their decade and a half long career, the German based outfit has continued to build upon their considerable reputation with each and every new album, without straying too far from the sound they initially founded themselves with. It’s been three years since the release of Invictus: Iconoclast III, and the five piece has finally returned with their seventh full-length effort, Veto. And as expected, it’s an album that delivers everything you’ve come to expect from Heaven Shall Burn.

Opening with a short introduction of a slow building mix of guitars and keyboards, Heaven Shall Burn soon get things underway when the band kick into high gear with the opening track, Godiva. Although the band’s trademark sound is well and truly intact, Godiva is a surprisingly melodic and catchy tune, and the way the guitars from the start of the song infiltrate throughout the track showcases an openness within the band’s sound and production (handled by Weichert and Dietz) that isn’t typical for the band. In the end, Godiva is very much Heaven Shall Burn sounding, but different enough to make you take notice. And for a band that has such a distinctive and recognisable sound, that’s never a bad thing.

The follow up track, Land of the Upright Ones, is somewhat more familiar ground for the band, with the track sounding more akin to the direction they followed on their last couple of albums, albeit with a decidedly more thrash-like influence heard in places (the shredding guitar at the start of the track is pure thrash). Following on in a very different direction is Die Stürme Rufen Dich (which translates to The Storms Call You), which seems to shift more towards a bit of a hardcore direction – which is no doubt helped by the guest backing vocals of Rob Franssen and Dominik Stammen from Dutch based thrash/hardcore act Born From Pain.

Fallen is a particularly brutal track from the moment it starts, and to some extend showcases the technical edge to the band’s melodic death metal sound, while the first single Hunters Will Be Hunted sees the band returning to their melodic side of song writing, without compromising one bit on the aggression and speed that has well and truly become the staple sound from the band. Not surprisingly, Hunters Will Be Hunted is one of the album’s real stand out cuts, and the perfect way to introduce Veto to listeners.

Unlike Fallen, You Will Be Godless leans a little more towards the death metal side of Heaven Shall Burn’s sound, but retains the extremity and aggression that’s expected from the band, while Antagonized is straight forward metalcore, and quite possibly one of the album’s weaker sounding and forgettable efforts.

The inclusion of the Blind Guardian cover, Valhalla (from their 1989 album Follow the Blind), was an interesting one, and the fact that they coaxed vocalist Hansi Kürsch to guest on the track as well is nothing short of coup. Cover versions on Heaven Shall Burn albums are nothing new, but this was an unexpected one. But despite the differences between the two bands, the cover works quite well.

Despite some truly solid tunes on the opening half of the album, it’s toward the tail end that the real stand out tracks can be located. Leading the tail end is the mid-paced Like Gods Among Mortals, which exudes a brooding and menacing vibe within its metallic hardcore shell, while 53 Nations boasts a huge rhythmic and galloping feel with its percussion and guitar work, all the while giving the air of an epic in its overall open sound and atmospherics.

Finishing up the album is Beyond Redemption which features some great lead guitar work from René Liedtke at the start to give the song a very melancholy and melodic introduction. Eventually the song gives way to allow a heavier middle section, but still retains a certain melodic evenness that really allows the song to stand out. Quite simply, this is something a little different from the standard Heaven Shall Burn style of songs, and definitely a favourite.

Heaven Shall Burn has never released a subpar album, but they have released some albums that tended to sound a little more like a variation on the same sound (most notably 2008’s Iconoclast and 2010’s Invictus: Iconoclast III). But, on Veto, the German outfit has managed to put together a very diverse collection of songs. And it’s that variety that helps Heaven Shall Burn’s latest effort from falling into ‘heard it all before’ pitfall that has claimed their last couple of releases for the most part.

More from Heaven Shall Burn