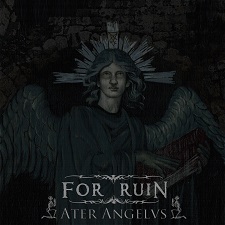 For Ruin is one of those relatively underground gems that no one has ever heard about, save for a relative few. Performing a style of blackened, melodic death metal they are definitely meant for fans in the vein of Amon Amarth or early In Flames. The music is very straightforward; it isn't the most technical or fluffed with background ambience by way of keyboards, but it constantly shreds.

Compared to previous efforts 'Ater Angelus' may indeed be For Ruin's most ferocious. Right from the opening track, "Unwinding", one can definitely hear the black metal influences from the guitar style, but the band also tosses in a lot of acoustic layering within the track as well to keep the melodies going. The vocals are throaty and raw - sometimes a bit too raw - and fans might argue that they could have been produced better. Of course, the entire razor edge of the music is exactly what For Ruin does best. The drumming is certainly varied from sounding like machine gun fire to some groove rhythms that do well with the solos (again here we have those In Flames reference sounds again). Other tracks like "The Master is Here" are just an explosion of music with little room for melodies, except during the middle part of the song where things slow down a bit and one can hear remnants of what sounds like bells going off in the background, which is an excellent addition.

As the album progresses some might feel that 'Ater Angelus' is a bit of a one trick pony as many of the songs tend to fall into the same structure and at first become noticeable but later not so potent. Fortunately, For Ruin bring in another influence as they change things up with "The Grand Design". Moving away from the furious shredding and tremolo picking, it feels more like a slow, plodding heap of doom/death metal - here one could compare the sound to Bolt Thrower or even possibly early Katatonia. It is very dark, groovy, and chug filled and grants listeners a welcome reprieve from the black metal side of the album. While it is the 'one of its kind' on the album, this isn't the highlight. That would fall to "... To Black" which is one of the better instrumentals heard for 2013. The musical arrangement, from the slow build up to the acoustic outro, is a fantastic display of melodic death metal in general and a great way to close the album. It showcases For Ruin's talent as instrumentalists and takes away from the monotony of the sometimes cliché melodic blackened death metal sound that populates some of the tracks.

For those familiar with For Ruin, the band hasn't quite made a quantum leap in their sound by doing anything new, but they sound just as good, if not better, than their last album, 'Last Light'. These Irish metal heads certainly know what they are getting into with their style and as long as they keep tweaking it here and there it will probably never get stale. Definitely recommended for those who like bands such as earlier Rotting Christ, Death, and At the Gates.

More from For Ruin