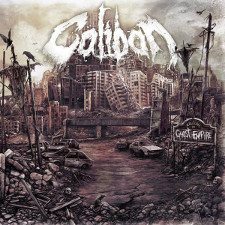 Returning to their core

For the past few releases, I kind of crucified Caliban for sounding like a poor man’s Killswitch Engage, if such a thing exists. I won’t necessarily go into my thoughts on Killswitch to begin with let alone a band who is sounding like a clone of them. From their metalcore beginnings and the obvious shift into KSE rip-off-dom, from this scribe’s point of view, the past few outings from this German quintet have been underwhelming and unoriginal to say the least. I’m not sure what’s changed before the release of 2012’s I Am Nemesis, but with that album the group shifted back towards their metalcore roots and a little more out of the generic shadow cast by Killswitch Engage. This time around, Ghost Empire continues with that ideal.

It’s clear right from the outset that Ghost Empire won’t redefine metalcore, and nor will it do anything to change the perception of the group either. They’ve managed to roll through the ups and downs of the genre and somehow survive where others have gone by the wayside. Perhaps the last few releases have been a learning curve for the band to return to a more traditional metalcore sound because that’s just what Ghost Empire is. Perhaps Caliban figured out what really works for them with I Am Nemesis. I’m not sure.

Sure, there’s plenty of soaring passages across the soundscape such as “King”, “Devil’s Night” and “Cries and Whispers”, with the latter of the group shying back towards their more recent melodic output that has dominated their previous release.  Having said that, it cannot be denied that at the heart of it all, Caliban seem to have cemented their rediscovery of the essence of metalcore. They’ve struck a reasonable balance between all forces that seem to be pushing for some air here and I think it’s fair to say that Ghost Empire could be Caliban’s best effort in quite some time.

I’m sure some will question my comments above arguing that Caliban were metalcore. I’d argue whilst true at the grass roots level, Ghost Empire is more akin to anything released before 2004’s The Opposite from Within. The melodic moments have to exist – it’s as essential to metalcore as breakdowns and gang chants – all of which exist on Ghost Empire. However, those melodic passages are wound back here making for truer metalcore release from Caliban.

Ghost Empire isn’t without its faults. Very few albums are. But the positive spin on this for Caliban fans is that the album reinforces the turning point that started with their previous release. It’s more metalcore than before and the band is doing their best to remove themselves from the shadow of the overrated Killswitch Engage – a move that can only work in Caliban’s favour as they rally further to re-establish themselves within the confines of the genre. For the first time in a long while, Caliban are showing potential again. It’s sure to please fans that have been struggling with the band’s releases over the best part of the previous decade. Caliban isn’t out of the woods yet, but there’s clearly light at the end of the tunnel.