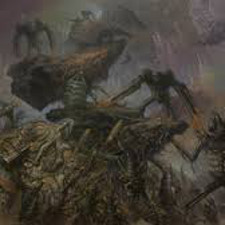 The sci-fi themed depiction of a bleak and chaotic futuristic vision adorning the cover of the debut album from New York’s Artificial Brain creates a fitting visual accompaniment for the otherworldly and mindboggling technical death metal wormhole the band has created with their debut offering. Labyrinth Constellation is a breath of fresh air in the technical death metal scene; an unorthodox, challenging and highly rewarding journey into a dark vortex riddled with paranoia and dangerous, alien beings. No folks, this is not tech-death of the overly clinical or conventional variety, but a unique mutation of the style that unsettles and compels in equal measure.

The songs are dense and unpredictable, yet the fluidity of the unorthodox arrangements, coupled with the slammy groove-based elements and precision execution keeps the album grounded. Along with the dissonant and borderline chaos of the material, Biolich vocalist Will Smith steers the album into brutal terrain with his guttural and unintelligible bellows. On the surface there are similarities between this album and Wormed’s excellent 2013 release, Exodromos. Both albums feature a sci-fi themed lyrical bent and brutal take on tech-death, and while Exodromos is a fine album in its own right, Labyrinth Constellation occupies a different oxygen bubble, lurking in its own dark pocket of space and revealing something altogether more alien and intelligent.

The band’s complex, off-kilter style of progressively aligned technical death metal recalls the structural oddities and unconventional melodies of Deathspell Omega; innovative, atypical song-writing angle of later-era Gorguts; and the dense and claustrophobic atmosphere of Ulcerate. Yet make no mistake, Artificial Brain have carved their own identity, creating something unique and surprisingly listenable, mostly due to the ample injections of groove and the musicians allowing the music to breathe from time to time. The lurching gait and twisting riffs on ‘Absorbing Black Ignition’ swirls into sinister, spacey synths, evidence of Artificial Brain’s ability to expand and contort beyond the knotty technicality and rapid fire blasting at the heart of the album. The warped complexities of the rhythm section lays a strong foundation for guitarists’ Jon Locastro and Dan Gargiulo (also of Revocation) to shred and dazzle with their layered cosmic harmonies and dense, technical riffs.

Meanwhile, the more primal death metal urges deployed, such as the adrenaline charged opening assault of ‘Worm Harvester’, offers an appealing counterpoint to the octopus-like rhythms and oddball technical riff-craft that dominates the album. And of course a tech-death album wouldn’t be complete without the sub genre’s usual characteristics. Labyrinth Constellation features all the mind-bending twists and stellar musicianship fans have come to expect from the style. With so much going on within each composition it becomes a challenge, rather than a chore, to isolate each instrument and track the myriad of time changes and tricky signatures. From the ruptured grooves and shape-shifting dynamics of ‘Wired Opposites’; to the blackened clusterfuck of ‘Bastard Planet’; and unhinged lurch and strange melodies of closer ‘Moon Funeral’, variety is supplied in ample quantities. The album morphs and shifts through different dimensions, held together by a taut thread of cohesion and unity.

The production and mixing job is exemplary, allowing each instrument room to shine, including the flashy and authoritative bass playing of Samuel Smith. The finished product balances a weighty combination of thick, hefty tones with the overall clarity required for deeper dissection and impact. The production is damn near perfect and a welcome change from the endlessly sterile, super slick production jobs that have become the predictable norm for technical death metal albums.

Regardless of the genre they’re pedalling, Profound Lore has an incredible knack of discovering forward thinking extreme metal bands willing to push the envelope and shatter conventional genre boundaries. Artificial Brain is another standout addition to the label’s proud roster, creating something unique and special with Labyrinth Constellation; a feat all the more impressive considering this is only their debut. Essential listening.