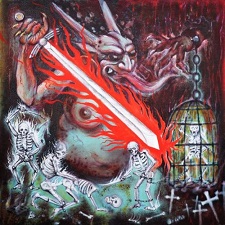 The Finns continue to pummel in their own unique way

Finland’s Impaled Nazarene are a band that have practically been around forever, having formed in 1990 and released their debut full-length release, Tol Cormpt Norz Norz Norz…, way back in 1992. Their importance to Finnish black metal (and black metal in general) is undeniable but they were also quite important to me personally as well with their second and third full-length albums (Ugra-Karma and Suomi Finland Perkele, respectively) playing a massive part in my very young, formative days. Those albums were as important to me as In the Nightside Eclipse, Dark Medieval Times, and Pure Holocaust were, to put their impact into perspective.

In spite of the fact that both Ugra-Karma and Suomi Finland Perkele were and are albums that hold a very special place with me, for reasons I can’t quantify, I never really kept up with the band after that point. With the exception of tape trading a copy of 1996’s Latex Cult back in about year 9 in high school and never really listening to it, I've not heard much the band has done in a long time, so it was with quite some interest that I came in to Vigorous and Liberating Death, the band’s 12th full-length release.

The most striking thing about the Impaled Nazarene of 2014 vs. the Impaled Nazarene of the early to mid ‘90s is how much more prevalent the punk influences are within the band’s sound. There’s no denying the fact that punk has always played a part in Impaled Nazarene’s make-up, but the two early albums previously mentioned (as opposed to their debut) erred vastly more towards a black metal-cum-thrash with punk aesthetic than the punk meets thrashy black metal sound we have here. In fact, in a funny way, the band’s contemporary sound actually harkens back to a much earlier time in both metal’s and their own history.

While I have to say up front that punk really isn’t my thing at the best of times, its influence with respect to Impaled Nazarene’s music works remarkably well. This is felt no more greatly than through Vigorous and Liberating Death’s adherence to the ideal of saying what needs to be said and then shutting up and moving on without any regret or sentimentality. With only three songs of the album’s 13 actually cracking the three minute mark (and most hovering somewhere between one and a half and two and a half minutes), brevity and succinctness are definitely the name of the game. There’s no filler to be found within any of the album’s songs whatsoever and the briskness carries the 33 minute duration ably. A slight complaint I have with this, however, is that the band’s whirlwind approach to song craft can render the album a bit of a blur by the time it has finished playing with many of the songs lacking a huge amount of distinctiveness but, really, I don’t think distinctiveness or hummable riffs are really the vibe Impaled Nazarene are going for here.

As you would expect for a band of this vintage, the musicianship on display is of a high calibre and the band clearly feels comfortable in their own skins. And while it’s true that “comfort” could be levelled as an insult in this context too because Impaled Nazarene really aren’t stepping out of the realm of what they’ve been doing for over 20 years, I’m not convinced that this would really be a fair charge to lay at their feet. This is a band that, for all intents and purposes, made their case clear right from the beginning and has largely stuck by it, so chastising them at this point in their career is both redundant and hardly in step with what their history has demonstrated.

From what I hear on Vigorous and Liberating Death, existing fans of Impaled Nazarene (and especially those of more modern Impaled Nazarene) shouldn’t really be on the receiving end of any surprises with this album but I have little doubt they’ll be more than happy with it nonetheless. Those who have never heard the band before, however, may want to try their hand at Ugra-Karma and Suomi Finland Perkele before diving right into it, firstly because those two albums rule and, secondly, because it might provide a little insight into the long-running band’s musical trajectory.