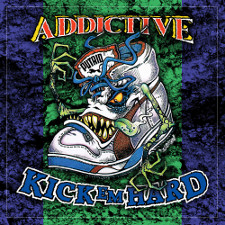 When the thrash metal movement was well and truly in full swing, nay, more so already on the decline even though no one saw it coming, Australia was doing its own thing to contribute to the genre. Sure, everyone knows Mortal Sin thanks to 1986’s crushing Mayhemic Destruction and 1989’s legendary Face of Despair but Addictive are the lesser known Aussie act that were proudly flying the thrash flag back in the day.

Formed in 1988, it was their five track Ward 74 demo that got them going. It’s raw but honest and other than the much larger production the songs on this demo would eventually receive, the songs themselves are much intact as they would appear a year later. In 1989, their criminally underrated debut long player, dubbed Pity of Man, burst onto the scene to minimal ruckus. To be fair, it wasn’t a genre defining release by any stretch but “Get Out of my Life”, “Boiling Point” and the amazing title track “Pity of Man” I think could stand the test against some of the third and even second tier classic thrash bands of that era. Perhaps, if anything, if one had to draw a comparison of sorts it would be the San Francisco (U.S.A.) thrashers Testament for what Addictive were all about. Although if one was pushed, one would see influences from other U.S. and Euro based contemporary thrash acts of the era within Addictive’s debut.

It would be a few years before their sophomore effort, Kick ‘em Hard, would see the light of day. Rumour has it that the delay was due to the master tapes being misplaced. Regardless, the big coup for the bands coveted second long player was the coup of securing Bob Daisley – yes he of Ozzy Osbourne, Rainbow et al fame – to produce it. The songs aren’t quite as aggressive or for that matter as memorable as their debut. What sinks this effort even further in my eyes is the dry sound akin to barely mentioned mid-to-late ‘80’s thrash acts such as Swedon’s Agony. Ultimately Kick ‘em Hard just lacks the excellent song writing of its predecessor. They are not bad songs as such. They just don’t stick as the material did from the band’s first effort.

With half of this material being unavailable before on CD and more so all of it unavailable for a very, very long time in general, it’s good to see Divebomb Records throwing some love Addictive’s way by unearthing these recordings. I’ve still got my Pity of Man cassette somewhere and it’s just about worn out after all these years. Whilst Australia’s Addictive might not be a name long remembered throughout the annals of thrash history, they are a part of it no matter what. For thrash fans keen on exploring every nuance of the genre, give this a go. For Aussie thrashers who need to revisit the golden age of thrash and our contribution to it, give this a go. This reissue of Addictive’s entire recorded output is as complete as it’s going to get. There truly isn’t anything else that could be packed into this two disc release making this a must have for fans of the band and those curious about our thrashing past.