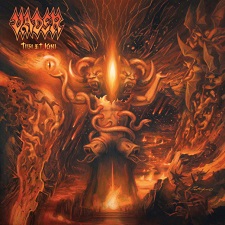 Another worthy addition to an already strong catalogue

It’s pretty amazing to think that trailblazing Polish death metal act, Vader, has been releasing albums for over 20 years now. Longevity of this kind is impressive enough for acts who enjoy some form of wider mainstream appeal, but for bands whose craft encompasses blast beats and guttural vocals and who have also managed to remain relevant and rather prolific throughout their career? Well, that kind of time span is practically an eternity.

2014 marks the release of Vader’s 11th full-length album, Tibi Et Igni, which is a platter that sees the band continuing to play to their strengths and staying wholly within the confines of a sound that has changed very little over the course of their career. This probably shouldn’t come as a surprise to anyone with even the most cursory of experience with Vader, however, and I don’t think it’s too much of a stretch to say that part of Vader’s long-running appeal is the knowledge that when you buy a Vader album, you’re getting a Vader album, with all that that entails.

With that being said, however, I have to be honest and say that while I do truly appreciate Vader and what they do quite a lot, they aren’t a band that generates real excitement from me anymore. Things were different when I was a teenager though. When I first got my hands on De Profundis (1995) and Black to the Blind (1997), not only did I really love those albums (and still do), I found Vader themselves to be a very exciting band and one whose releases I greatly looked forward to hearing. Fast forward some 15 years or so though and a long career that has been as solid and dependable as it has been, dare I say, predictable, has tempered the excitement that once existed. Enter Tibi Et Igni.

Right out of the gate Vader commits one of the most obnoxious of album sins by placing nearly two minutes of introduction within a four and a half minute song. That’s right, there’s an introduction that is practically unskippable because it’s part of the actual song that follows it. There’s a reason you don’t see this kind of thing on albums often (or even at all) these days, and that’s because it’s ridiculous. It’s incredibly annoying to have to wade through an introduction that you might, might, listen to a couple of times while you’re acquainting yourself with an album but after which would never listen to again because it becomes like just about every other introductory piece ever placed on a death metal album - redundant.

Anyway, in the scheme of things, this is pretty much the only negative blip to be found on what is otherwise a strong album from a band that has made a career out of making strong albums. This leads into perhaps the most important question: if Vader consistently releases good albums, by what metric do we determine whether one fares better than another? For me, the answer to that question comes down to whether or not there are those extraordinary riffs or songs that stand out well above all others on a recording. The lead single from De Profundis, "Silent Empire", " Carnal" and "Foetus God" from Black to the Blind, and “Lead Us!!!” from The Art of War EP are all examples of this. They’re the kind of moments that really bring their respective albums to life and elevate all of the other material around them. Tibi Et Igni, while undoubtedly a good album, unfortunately doesn’t really contain a moment like the aforementioned ones for me.

I don’t really want to go down the rabbit hole of trying to quantify what I feel makes a strong or memorable riff or song because, obviously, subjectivity plays a huge part in that determination. Suffice it to say, then, that from my perspective, the material on Tibi Et Igni is really, really good and wholly deserving of its place within Vader’s catalogue but I just don’t find it to be particularly great. To put another way, I have no doubt that I’ll listen to this album again in the future but chances are that I’ll be reaching for De Profundis or Black to the Blind first. Take that as you will.