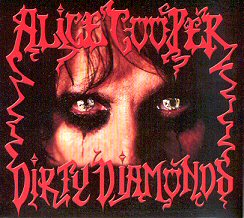 It's a little known fact (And only a theory I had until it was confirmed by the prince of darkness himself when I last interviewed him last in late 2003), but Alice Cooper loves to work his albums in pairs. It only takes a cursory glance of his vast body of work (Some twenty-four albums) over the last four decades to see a distinct pattern. When Cooper finds a sound and direction he likes, he'll pursue it, and then he'll do it again. So it's no real surprise find Cooper has once again reproduced the distinct '70's sounding back to basics hard rock sound that was first heard on 2003's highly acclaimed The Eyes Of Alice Cooper for his follow up release Dirty Diamonds.

With a slight alteration to the line up (Consisting of guitarists Damon Johnson and Ryan Roxie, bassist Chuck Garric and drummer Tommy Cufetos), Cooper once again gets things off to a rocking start with the cleverly titled Woman Of Mass Distraction, while the acoustic infused (But no less rocking) You Make Me Wanna (Which incidentally is very reminiscent of Jimi Hendrix's All Along The Watchtower), the catchy Cheap Trick like Sunset Babies (All Got Rabies), Steal That Car (This 2004 version of Lost In America) and the retro sounding Your Own Worst Enemy are all straight out rock numbers that mirror the authentic early '70's Detroit riff rock direction Cooper and his band last time around with The Eyes Of Alice Cooper.

The album does boast two undisputed classics in the rock format with the raw sounding title track Dirty Diamonds (Which features some very John Barry/James Bond sounding horns), and the darker and more modern sounding (Only just however) Run Down The Devil standing out as pure Cooper gems. But just like his previous effort, Dirty Diamonds also reveals a few twists to the simple rock format. The laid back T-Rex/Rolling Stones vibe of Perfect (The tragic tale of a woman who believes she can sing, but obviously can't hit a note) is effortlessly catchy and ironic, while Six Hours (And Zombie Dance to a certain extent) is a rare treat as Cooper ventures towards more late night sounding blues territory. Cooper's black humour hasn't lost its edge, as evident on the cross-dressing truck driver tale within the country sounding The Saga Of Jesse Jane, while the fantastic cover of The Left Banke's Pretty Ballerina adds a gentle '60's pop flavour to the album.

Apart from the rather misguided bonus track Stand (Which pairs up Cooper with rapper Xzibit, and which was previously only available on 2004's Athens Olympic compilation Unity), Dirty Diamonds is another undisputed diamond effort from the legendary Coop.