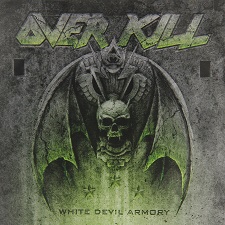 With a long career behind them, East Coast metal band Overkill is releasing their 17th studio album, White Devil Armory. It follows 2012's highly successful The Electric Age and features the steady line-up the band has had since 2007's Immortalis.

Right from the start, Overkill unleashes their time-honoured thrash metal sound with "XDM" and "Armorist". "XDM" is a lead-in instrumental that has a live sense to it. It would be an excellent way to start a concert, and it really builds into the first song, "Armorist". "Armorist" is textbook thrash, and the band's chants of "Armory! Armory!" are absolutely fierce. The line, "I'm a one man army / I'm a warring nation", sums up the angry freedom-fighting warrior who makes his way into the lyrics of the other tracks.

The classic thrash metal sound makes up the bulk of White Devil Armory. "Down to the Bone" has a thick, heavy bass line and a strong guitar solo--one that is surprisingly long. "Where There's Smoke" is a speed-oriented thrash song with some cool backing vocals and an epic Bobby Blitz scream at end.

There are, however, some moments when the band veers away from their trademark thrash metal sound. "Bitter Pill" is a good example of this--still sounding like Overkill, but with a modern twist. With its slow, looming intro and ultra heavy bass, it may just be my favourite on the album. "King of the Rat Bastards" is also a great one, with its dynamic audio channel changes that hit you from every direction.

"Another Day to Die", having driving rhythm and grooving riffs, stands out as well, as does White Devil Armory's final track "In the Name". This song about "Killing In the name of the Father / In the name of the Son," certainly has thrash elements, but at times, it takes on a NWOBHM or maybe a power metal feel. At the end, it even turns into an old-timey drinking and fighting song. Overall, "In the Name" is ferocious, and White Devil Armory ends just as powerfully as it began.

White Devil Armory may just prove that it is hard to find another band as consistent as Overkill. There has never really been a bad Overkill album, particularly in the last decade, and the band is not showing any sign of aging either. Vocalist Bobby "Blitz" Ellsworth can still sing with ear piercing grit he had in the '80s. Guitarists Dave Linsk and Derek "The Skull" Tailer on top of their game with many fantastic solos, and the rhythms provided by bassist D.D. Verni and drummer Ron Lipnicki are nothing short of intense. Consistency aside, White Devil Armory is not simply a re-hashing of The Electric Age, although the albums are certainly comparable. White Devil Armory is much more forceful, and is undoubtedly worth a listen.