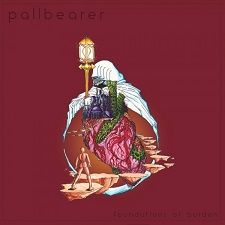 I don't think it's physically possible for me to overstate just how much I adored and continue to adore Pallbearer's debut album, 2012’s Sorrow and Extinction. The band's harnessing of deep and emotive doom was remarkable for its own sake but was even more impressive when viewed within the context of it being the band’s first full-length release.

With news of a follow-up breaking earlier this year, my anticipation was naturally very high, but with it were the inevitable worries about whether or not Pallbearer would be able to avoid the dreaded second album slump. Foundations of Burden is here to show that the excellence displayed on Sorrow and Extinction was no mere stroke of luck and that the sound of Pallbearer is in a state of evolution.

For all of the praise I’ve had for Pallbearer over the past couple of years, I have to say that I was initially underwhelmed by Foundations of Burden. It’s not that the material on offer was vastly different to what was present on Sorrow and Extinction but rather that Foundations of Burden is almost a textbook definition of slow-burner album. It’s a collection of songs that feature a plethora of memorable passages and great hooks but they are only begrudgingly revealed to the listener with perseverance over the course of several listens. Though immediacy isn’t one of the album’s qualities, listening perseverance is repaid in spades, however, once the subtlety of the album’s compositions break through the membrane that separates the strange and unknown from the warm and familiar.

In fact, ‘warmth’ is probably one of the most appropriate adjectives I can use to accurately describe the predominant feeling given off by and the textural quality of Foundations of Burden. Even with its lengthy passages of introspection and its multifaceted morose moods, there is also an overriding yearning quality present that seemingly isn’t derived from sorrow but rather from a place of upward-facing positivity and perhaps even hope. The muddy buzz of the guitars and the overall production in general go quite a way to amplifying this feeling, no doubt, but it’s the material itself that seems to be seeking out the light, almost as though it’s reaching for some form of higher ground above and outside of the mire. This is perhaps the one profoundly substantial difference between Foundations of Burden and Sorrow and Extinction - while the latter was quite direct in telegraphing its sorrowful intentions through a plain and clear production, the former works its way into your subconscious almost indirectly and with the delicacy of a slowly enveloping but nonetheless welcoming and all-encompassing cocoon-like embrace.

As stated, Pallbearer’s song-writing hasn’t so much changed at its core between releases but its ultimate realisation has. The band’s trad-doom flag still flies proudly on Foundations of Burden but the way in which they utilise that building block has undergone serious growth and maturation. This is no more evident than in the greater sense of freedom that each of the songs exhibit. Pallbearer seems to have taken what worked so well on Sorrow and Extinction and unshackled themselves from any hesitation that they may have had at the time. This isn’t to suggest that the song-writing on Sorrow and Extinction was stunted or was held back in any way, but rather that Foundations of Burden feels as though there is a greater confidence present within the band that either wasn’t there previously or that they feel much more comfortable in exhibiting now. The end result is material that retains all that made the former album so great but also features a new-found sense of openness, creative adventurousness, and overall narrative flow.

Foundations of Burden exemplifies all that the doom genre can be. It’s a richly rewarding album borne of intricate but delicately constructed song-writing and a melting pot of complex moods and emotions. It’s quite remarkable just how much Pallbearer has grown in the space of a meagre two years and if they keep both the pace and the trajectory they’re currently on, it’s almost scary to consider how good they’ll be in another two years. Do yourself a favour and pick this one up.