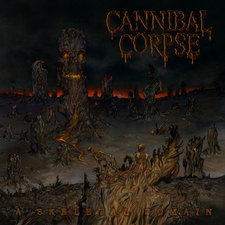 Album no. 13 and a quarter-century of death metal brilliance

With a career spanning twenty-five years and thirteen full-length studio albums, Cannibal Corpse is undeniably a monumental name in death metal. By the start of the 1990s, the New Yorkers had taken the genre and bludgeoned the shit out of it; spawning the sound we know today and have been listening to for just about two and a half decades. With violent anthems like “Hammer Smashed Face” and “Fucked With a Knife”, Cannibal Corpse quickly earned themselves international infamy with their controversial lyrical content and album covers (predominantly created by Vincent Locke); all inspired by the violence of horror films and overall themes of gore and carnage. And even in the face of tours getting cancelled thanks to protestations from orthodox religious groups, the band continues on their brutal path, releasing one musical massacre after the next. A Skeletal Domain is, just like the twelve albums before it, exactly what any fan can expect to hear from Cannibal Corpse. Will this album be remembered as one of this year’s best heavy metal releases? No, it probably won’t be. But it’s still awesome because it’s what these guys do best and that’s “fire up the chainsaw”!

Here is a band that’s certainly not known for its variability over the years but one significant change that they did make for A Skeletal Domain was deciding not to work with heavyweight producer Erik Rutan, who helped lay down the band’s previous three albums, and rather going with Mark Lewis at Audiohammer Studios in Orlando, Florida. As good as Rutan is and as good as those albums sound, it must be said that Lewis did a super job here. A Skeletal Domain sounds a lot crisper overall with hardly a fault to be found on the mixing and mastering of it either. An album like Torture (2012) sounds very coarse in comparison and the most obvious differences on their latest effort are George ‘Corpsegrinder’ Fisher’s vocals which blend in better rather than splicing the sound, Alex Webster’s bass which floats through a lot smoother, and finally the recording of Paul Mazurkiewicz’s drum parts which definitely sound cleaner. Even Locke went with a very different feel on the album’s cover artwork, dispensing with the overtly graphic depictions of gore and violence.

It would come at a bit of a push to pick out any specific songs that warrant a special mention here as, in true Cannibal Corpse style, it’s about the entire monstrous slab of mangled riffs, drum blasts, guttural vocals, and groovy pulses on bass. Pat O’Brien and Rob Barrett are as lethal as always on guitar and with those little moments of flair thrown in there too, always within the final third of the song. Fisher is such an immense vocalist and Lewis has helped capture his flesh-ripping brilliance better than ever before. The crown of death metal vocalist unquestionably belongs atop of the head of one ‘Corpsegrinder’.

And there we have it, folks. A quarter-century of death metal carnage from the mighty Cannibal Corpse and you get to lose your shit in celebration with the band’s thirteenth studio album. Long live the Corpse!