The Year the Sun Died 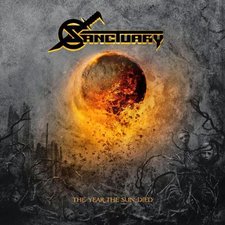 Sanctuary's new and improved sound will cure that Nevermore withdrawal

Hands up if you miss Nevermore? Yeah, me too, but while the status of that iconic metal band remains unknown and not looking to continue any time soon, all is not lost. An old band, thought to be gone forever has been resurrected. Before Nevermore, there was Sanctuary, a band that formed in 1985 and disbanded in 1992, with Nevermore rising from its ashes.

Now it seems as though the reverse has happened, with Sanctuary being revived 18 years after being disbanded. In the same year Nevermore released what would look to be their final album, The Ophidian Conspiracy, Warrel Dane released a compilation album containing remastered versions of Sanctuary's two albums, 1987's Refuge Denied and 1989's Into the Mirror Black, as a sign that this band could be making a mighty return to the metal scene. Four years later, that sign has become reality with Sanctuary releasing their third and latest album, The Year the Sun Died.

Version 2.0 of Sanctuary is almost the same as the original line-up, with only guitarist Sean Blosl not reuniting with drummer Dave Budbill, guitarist Lenny Rutledge, bassist Jim Sheppard (ex-Nevermore), and vocalist Warrel Dane. While another ex-Nevermore member, Jeff Loomis, played live shows with Sanctuary in both 1992 and 2010-11, he has chosen to stick with his current bands (Conquering Dystopia and Jeff Loomis). Sanctuary brought in ex-Forced Entry guitarist Brad Hull to complete the line-up in 2011 and the same line-up that continues today.

Of course you're all wondering if this resurrected version of Sanctuary sounds anything like Nevermore. Well, yes and no to be precise. Of course there will always been a sound connection with Nevermore, but there's no point making Sanctuary a Nevermore clone, you may as well keep Nevermore going. With Sanctuary's progressive/groove metal style, there are quite a few band similarities other than Nevermore, which include Metal Church, Helstar, Iced Earth, Control Denied, and even Queensryche.

The fusion of progressive and groove metal which Nevermore mastered in their time has been brought into Sanctuary's revamped and refreshing sound, featuring complex song-writing, wonderful melodies, crunching guitar riffs, and Warrel Dane's unique vocal tones. Sanctuary feels like the lighter side of the darker Nevermore, although still lies within those gloomy and bleak attributes, but not as bogged down as Nevermore had them. The majority of the tracks on The Year the Sun Died are at a slower pace, but if you know Dane's superior song-writing skills, the tempo of songs change considerably throughout.

While there have been comparisons made against Lenny Rutledge to Jeff Loomis, I feel that he nicely holds his own on this release and doesn't try to sound like Loomis. The same goes for Brad Hull and the two combined put on an almighty performance, with riffs aplenty, a tonne of power and crunch and excellent solos thrown in here and there. The album also flows so smoothly from beginning to end, and the songs are quite different from one another, but they are connected too. At 53 years of age, Warrel Dane sounds as good as ever, still breaking out those signature shrieks in parts here and there as he did with Nevermore, but on this release there is much more harmony as he sings more fluidly. There is less to no anger in his vocals, which was also the case with Nevermore.

I can't remember the last time a heard an album that is so consistent from start to end like it is here with The Year the Sun Died. Every track is a standout, and can listen through over and over without getting bored or sick of it. With every listen, something new appears that you may have missed the previous time. Absolute killer tracks on this excellent disc include "Question Existence Fading", "Arise and Purify", "Frozen", "The World is Wired", and "Exitium (Anthem of the Living)".

In the end, while knowing how good a song-writer Warrel Dane is, I wasn't expecting anything exceptional, but that's what I got. Sanctuary's sound is a modern progression from Nevermore, however with a touch of less grunt and forcefulness. However, that takes nothing away from this brilliant release that more than makes up for it with supreme song-writing, precise guitar work from Hull and Rutledge and the vocal performance of Dane, who sounds more than on top of his game. Of course old Nevermore fans should engulf this release, but more so fans of modern heavy metal, power/prog and prog/groove metal should have a listen to the new and improved Sanctuary. One of the best for 2014.