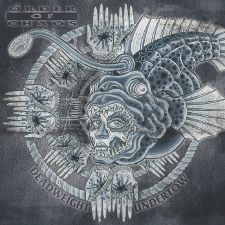 Another triumph for the Melbourne noisemakers

Despite marking their return to the scene after a five year absence with their long overdue sophomore effort, Eyehate Swansongs, in late 2008, reactivated Melbourne (Victoria, Australia) based outfit Order of Chaos certainly haven’t been in any rush to make up for any lost time with anything new from the studio.

Anyone who’s remotely familiar with the band’s work in the past will be aware of how difficult it is to pigeonhole their sound. And true to their past sound, Deadweight Undertow is no different, with the band fusing elements of metal, hardcore and punk into one almighty sound that’s as primitive as it is direct.

The fast paced “Dead on Arrival” gets the album off to a bludgeoning start, with a strong sense of punk influences coming through the onslaught of metallic guitars. Vainoras’ near indecipherable guttural growls and howls compliments the harsh nature of the music, and gives the song an air of menace that Order of Chaos has built their reputation on.

The follow-up track, “No Passion To The Grind”, is a surprisingly groove based effort that sees the band inject a liberal dose of melody to the usual mix of chaos (which at times brings to mind Pantera), which earns the song a place as one of the album’s real stand outs, while “Fail Me Not” is a full on assault with some great sounding riff structures, with only respite offered during the slower chorus passages.

Despite a less than impressive start, the dense sounding stoner grooved “Shadow Saviour” manages to pick up eventually to inevitably transform into a likeable tune, but it’s the frantic blast of the catchy/punk edged “Hand Over Fist”, the cacophonous title track “Deadweight Undertow” and the ever menacing and twisted “Losing Limbs” where the band produce the real winners.

Not unlike “Shadow Saviour”, “Home” took a while to really unveil its true self to me. But despite its slower and illusive melody, the song did eventually win me over (although it has to be said that the unexpected Van Halen salute at the tail end of the song grabbed me from the first time I heard it!).

“Smoke and Mirrors” is another firm favourite with the band managing to work a strong sense of groove and melody into their brand of punk rock/hardcore/metal (and the rather brief and decidedly different sounding solo that pops us around the three quarter mark doesn’t hurt either), while the band’s take on Blag Flag’s “My War” (which originally appeared on the band’s 1984 album of the same name) is an absolute storming cover, and a worthy addition to the album.

Finishing things up is “Primrose Path”, which is not only the album’s longest track (clocking in at just past the five minute mark), but also one of the album’s thought out tracks in terms of structured song writing, varying tempo shifts and a seething anger that builds and builds toward a climatic end.

Overall, Deadweight Undertow is another step for the band from Eyehate Swansongs. Production wise, the band’s latest effort sounds a little more refined (the album was mixed and mastered by Blood Duster’s Jason P.C at his Melbourne based Goatsound Studio), as too does the song writing, without any real change of style evident throughout from what the band have delivered in the past. But as a whole, Order of Chaos’ latest release is a far more enjoyable effort, and that’s enough to rate Deadweight Undertow as hands down the stronger Order of Chaos release to date.

More from Order of Chaos