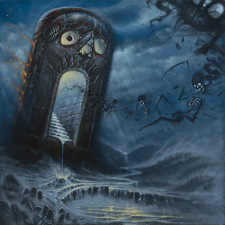 Revocation is, quite simply put, a machine. Looking at their history after changing their name from Cryptic Warning in 2006, since the release of their debut album in 2008, titled Empire of the Obscene, this quartet have unleased four more long players, including this year’s death thrash blast Deathless. Five albums in six years is an impressive effort when you consider the intensity of Revocation’s music. You certainly can’t deny the band’s enthusiasm or energy. Even if you take into consideration the band’s formative years from 2006, five albums in eight years is a solid effort these days, especially considering most bands make income from touring and merch these days as opposed to album sales.

However, the thing is with Revocation is that each new releases is as consistent as its predecessor. They know their style, they know their craft, they know what they want to achieve and they just get down to it and bust it out. The end result time and time again is never one of disappointment. Right from the opening blast of “A Debt Owed to the Grave” - which has a huge Decapitated vibe - you know that Revocation still hasn’t missed a beat. They are still drinking the same Kool-Aid that fuelled their back catalogue and that right there is instant satisfaction for fans.

Every riff, and there are plenty of them throughout, is a sharp as the blades of a Ninja star. If you want riffs, Revocation has them and then some. They just don’t know when to let up, which is a good thing when their output is this reliable album after album, and Deathless is certainly no exception to that rule. In fact, it’s a tighter, thrashier continuation of their 2013 self titled effort that sees the Boston (Massachusetts, U.S.A.) group stick to the play book for the most part, resulting in a blistering collection of tracks for album number five.

In amongst the riff fury that pretty much defines Revocation, there’s a little bit of variety here and there. For the most part, Deathless is a relentless assault of thrash driven death metal. It’s a wild and ferocious ride until the midpoint of “Madness Opus” which throws down a slower, groovier pace which offers the first real breathing room throughout the ten tracks offered up. When the album kicks back into top gear, it’s only when the final two tracks appear that things get very interesting in a good way.

The instrumental piece, dubbed “Apex”, is every bit as challenging as it is rewarding. It’s a track that’s not too far removed from the instrumental pieces Revocation have done in the past as it shifts from prog to tech to almost jazz fusion with no word of warning, all the time effortlessly delivering layer upon layer of textured guitars throughout. The finale, “Witch Trials”, is different in that it’s an impressive combination of both progressive and technical metal as opposed to the band’s steady diet of death and thrash metal. Given the aural bruising the majority of the album delivers to this point, “Witch Trials” not only further showcases the band’s undeniable talent, but also keeps that album from feeling claustrophobic. These last two tracks certainly open it up and gives the entire release some much needed space when it counts.

The question must be asked then - can Revocation do no wrong? Well five albums in and it seems that way at least. What makes this consistency even more impressive is just how quickly the band is able to turn around and churn an album out. They’ve certainly set a level of expectation with their albums and Deathless meets it and raises the bar just that little higher. Who knows how long this can go on for but at this point in time, rest assured that you get what you expect from Revocation. Sometimes, you get a little more as well, but it’s never something that will blindside you entirely. Deathless is another top shelf release from Revocation. What more did you expect?