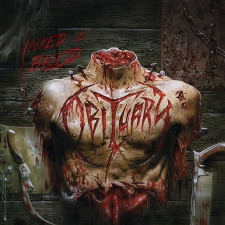 As much as some bands get absolute grief from fans and the press alike for just doing the same thing all the time - releasing an album that sounds the same, looks the same, et cetera - it’s funny that some bands get some kind of pass automatically issued because of who they are. As much as I berated the last Slayer album, there were plenty that loved it just because it’s “fuckin’ Slayer!!”. Same with AC/DC and the list goes on and on. For some reason, for certain bands it’s ok for them to do what they do as long as they don’t colour too far outside the lines which they established long ago. Obituary is one of those bands.

“Centuries of Lies” is instantly identifiable as Obituary. From vocalist John Tardy’s inimitable growl to Trever Peres’ signature guitar tone, there’s little doubt that album number nine from these Floridian (U.S.A.) death metal pioneers is cut from the same mould that they pioneered a quarter of a century ago with their classic debut long player, the legendary Slowly We Rot. Truly destructive riffs that are the cornerstone of Obituary’s unique style are in abundance as you’d expect with tracks such as “Violent by Nature”, “Within a Dying Breed”, “Paralyze” and the completely devastating title track “Inked in Blood” being testament to this. In fact, the title track is the easily the heaviest track on the album as it channels every nuance you could ever associate with Obituary into one single obliterating punch.

What makes Inked in Blood an interesting release for a band with legacy such as Obituary is that it was crowd funded. For a band with a long standing line of releases with Roadrunner Records and a duo of releases for Candlelight Records under their belt, it’s a sign of the times when a band like Obituary switches to crowd funding. It certainly blew everyone’s minds when they reached their US$10,000 target in less than 24 hours and sure enough, whilst the crowd funders received their loot from their early commitment to the campaign, it was inevitable that a label would come along. This time it was U.S. extreme metal label Relapse Records who are bringing the release to the masses.

Another first for the group with this release is that it is the first release since their 1989 debut that has not featured bassist Frank Watkins who parted ways with the band in 2010. Watkins, who now plays with Norwegian black metallers Gorgoroth, has been replaced by legendary Death bassist Terry Butler (who also played with Massacre). It’s also notable that lead guitarist Ralph Santolla has also split from the band, replaced with guitarist Kenny Andrews. His leads are sound but it’s the fills that are, at times, one of the points of contention that I have with this album. Whilst noise laden, dive bomb leads (a-la Allen West) and tastefully busy leads (a-la James Murphy and later on Santolla) have been a staple part of Obituary’s sound in the past, I have no issue with Andrews’ lead breaks as such. It is the fills, or textures, that appear here and there - such as towards dying moments of “Deny You” - that are just un-Obituary-ish for want of a much better term. It may sound picky I know but when it comes to a band like Obituary who just deliver consistent albums with a style I can depend on, I know what I want and expect from Obituary and that just isn’t it. Further to that, they just sound odd and almost out of place, too.

If there are any further faults with this album, it’s that John Tardy’s voice has lost a little bit of that guttural growl that he truly trademarked in the late ‘80’s and early ‘90’s. Sure it’s to be expected with age, but for whatever reason, it’s lacking just a little this time around. Production wise, the sound on Inked in Blood is a little light on as well. I can’t quite put my finger on it as to what it is - guitar tone, overall production... I’m not sure - either way the tone of the album isn’t quite as heavy as I’d normally expect from Obituary.  To be fair, it doesn’t really detract from the album as such, but to these old ears who have been listening to Obituary since Slowly We Rot grossed, er I mean graced the shelves, something’s definitely not quite up to par this time around.

Putting all of the above into perspective though, Inked in Blood still comes up trumps. It’s everything you want and expect from an Obituary album. There’s nothing here that truly degrades the experience of cranking an Obituary album to the point of pissing off your neighbours. The consistency is there despite the few issues I mentioned before. Album of the year this is not but the award for “Most Consistent” definitely goes to these guys once again. Fans rejoice because Obituary is back and they sound just like you want them too.