Beyond the Red Mirror 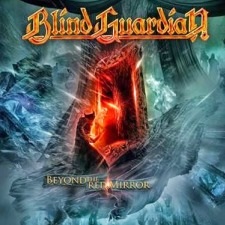 A strong contender for album of the year

When you talk about Germany’s Blind Guardian, there really isn’t much more to say that hasn’t been said already in their long career. Forming in 1984 (as Lucifer’s Heritage, changing to Blind Guardian in 1986), Blind Guardian and other bands such as Helloween were to become the pioneers of European speed/power metal. Fast forward 27 years from their 1988 debut album Battalions of Fear, and Blind Guardian are still the premier band when it comes to European epic/symphonic power/prog metal. After influencing countless numbers of bands and putting up with countless numbers of copycat bands, Blind Guardian still leads the way and have legions of fans spanned right across the globe.

Nearly every member/past member of Blind Guardian has either formed a side project or has become a member of another band; starting with singer/songwriter and co-founder of the band, Hansi Kursch. Hansi has made multiple guest appearances on other band’s albums; and let’s not forget the collaboration with Iced Earth's Jon Schaffer with Demons & Wizards. Drummer Frederik Ehkme was a founding member of power metal band Sinbreed, and joined later by Blind Guardian guitarist Marcus Siepen. Past member Thomen Stauch was recently invited to be the drummer for Serious Black, while also the founder of Savage Circus, and was an original member of Iron Savior. You know when almost every member of a band are able to either form another band or be part of a band, that they are highly skilled and confident in what they do. And in return makes Blind Guardian a well-respected band in the metal world.

As far as Blind Guardian goes, every album the band has released right from the speedy debut Battalions of Fear through to Nightfall in Middle-Earth, A Twist in the Myth, and the brilliant At the Edge of Time have been fantastic releases. In my humble opinion, Blind Guardian are one of those few bands around that have never released a bad album to date; in fact they get even better with age, if their latest epic disc Beyond the Red Mirror is anything to go by.

If the anticipation was massive for Blind Guardian’s previous release, you can only imagine the gigantic buzz that has been circling around for the German’s 10th and latest album. To keep die-hard fans extremely happy since the previous CD (and they are always happy), the band released A Traveler’s Guide to Space and Time; a massive boxed set containing their first seven albums, plus two live albums and the 2004 live DVD Imaginations Through the Looking Glass. All the tracks were remastered and remixed in 2012 and as far as boxed sets go, this one was the absolute bomb.

Beyond the Red Mirror is a concept album, continuing the story that started on the song “Imaginations from the Other Side”, taken from the excellent album of the same name released back in 1995; and the entire 10 tracks are separated into seven parts (or more depending on the version released). Yet once again we the fans have had to wait the longest time to hear a new album by this excellent band. Just a touch under five years, but holy cow is Beyond the Red Mirror well worth the wait.

While there are numerous things about Blind Guardian that makes them such a fantastic and consistent band, aside from their longevity, is their absolute mastery of the gift of song-writing. For decades, Hansi and company have been able to write a plethora of wondering and memorable songs, both in style, structure, creativity and lyrics. Endless layers upon layers of tantalising music, smothered with choirs, orchestras and powerful emotions that is the result of a band excelling in what they do. Highlighting Hansi Kursch and André Olbrich in particular; the main masterminds of the song-writing, however on the latest album, Hansi and André have allowed personnel outside of the band to help in the song-writing.

These people include keyboardist Mattias Ulmer (“The Ninth Wave”), who has worked with BG since their previous album; pianist Michael Schüren (“Miracle Machine”), who has also worked with BG on a number of albums over the years, and finally producer Charlie Bauerfeind on the track “The Throne”. Bauerfeind has produced the last four Blind Guardian albums (including this one) and has worked with other bands including Hammerfall, Helloween, Angra, Axel Rudi Pell, Saxon, Rage and Freedom Call.

The power metal pioneers from Germany have returned after an almost five year absence, sounding and looking refreshed and full of creative ideas, producing yet another epic and bombastic sounding album, choc-full of supreme song-writing, and powerful and emotional music; just another typical kick as Blind Guardian CD really. Featuring three different choirs from Budapest, Prague and Boston, along with two full-scale 90 member orchestras, the result is basically exactly what you’d be imagining right now - larger than life pieces of music that could easily be a film score that perfectly connects to and continues on from their 1995 album Imaginations from the Other Side.

Yet again another Blind Guardian album has completely blown me away from beginning to end. Every track is superb, full of emotion, powerful guitars and strong soaring vocals from Hansi; just what you’d expect from Blind Guardian. All songs are winners and the album is almost flawless. If you know and love Blind Guardian, then you know what to expect. An emotional and powerful disc, which brings you in to their world and takes you through an epic and bombastic metal journey that will most definitely make all power metal fans top 10’s by the end of the year.

Comparing it to their previous album, Beyond the Red Mirror easily matches it, or could even surpass it depending on personal preference. You know already whether you’re gonna love it or not, so the real question is – what version of the album are you gonna get, as aside from the standard version, there is also the Mediabook edition (one bonus track), the earbook edition (two bonus tracks), and the earbook deluxe edition (includes vinyl with alternate versions of two songs). Go get it, you won’t be disappointed...are you ever with Blind Guardian?