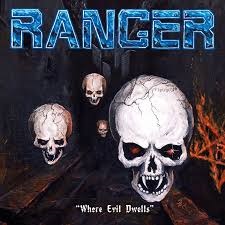 Strap in and get ready for a full-on thrash/speed metal attack.

Hailing from Helsinki, Finland, Ranger has been on the scene since 2009, having released a number of demos and EP’s, including 2013’s relatively longer EP release, Knights of Darkness.  And so, 2015 sees the release of the band’s first long-player, Where Evil Dwells.

To-date each release from Ranger, comprising band members Dimi Pontiac (vocals, bass), Ville Valtonen and Mikael Haavisto (guitars) and Miko Sipilä (drums) has built on the last and clearly shows that Ranger’s hearts are firmly planted in the thrash and speed metal which spread its glorious wings in the 1980’s, particularly Euro-thrash legends like Sodom, Destruction and Kreator.

From the opening riffs and nuclear warfare lyrics of Where Evil Dwells’ opener, “Defcon 1”, it is clear that the Ranger boys are aiming for a fast-paced, old-school speed metal attack.

Building on the old-school feel of the album, I could picture “Black Circle (S.Y.L.S)” being used as an example of what was wrong with heavy metal, held forth by puritanical crusaders against Satan in the 1980’s (or even now for that matter).  While not as overt as a Slayer track like “Altar of Sacrifice”, the second half of the song, including the subversive lyrical call “say you love Satan”, might put more than a few in a tizz.  But most importantly, it’s a damn fine track!

The title track, “Where Evil Dwells”, takes you on an (almost) eleven minute journey, mixing up the pace along the way.  This song shows influences from more than just the speed metal realm, and with the changes in tempo, is a fine effort in maintaining a listener’s interest for more than the typical five or six minutes.  By the time I did start to think to myself “haven’t we done this a few times now”, there was only around one minute left in the song, so it’s a pretty solid effort, no doubt.

The closing “Storm of Power” flies at breakneck speed for all of three minutes and left me looking for the repeat button.  The closing two track sequence of “Where Evil Dwells” and “Storm of Power” feels a little like …And Justice for All, with the epic long track (“To Live is to Die”) followed by a ripping album closer (“Dyers Eve”).

Overall, the album contains excellent guitar interplay between Valtonen and Haavisto and a very solid drum performance by Sipilä.  Pontiac’s vocals are straight from the thrash/speed play-book and his high-pitched efforts are top-class.  The result is an album that fits in effortlessly with any number of 80’s thrash or speed metal standards and also more recent efforts like Evil Invaders’ Pulses of Pleasure.

You could argue that the production is a let-down, being a bit basic.  But I think it adds to the whole feel of the album; it just feels right.

On top of all that, Where Evil Dwells is just damn fun to listen to.  These guys obviously know what they are out to produce and love doing it.  It’s an awesome feeling to spin an album which just makes you smile from the get-go.

I see this as making my list of 2015’s best albums come December.