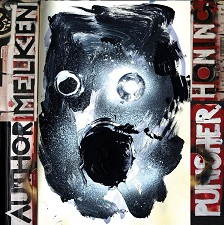 As jaded and crabby as it probably makes me sound, I just don’t see a lot of true innovation going on in music’s heavier and darker realms these days and, if I’m being honest, I probably haven't for a long time. Oh, sure, there are still good and sometimes even great albums being released all the time, but it would be a stretch to say that there are many that are really doing anything particularly innovative; those taking that bold step to help push a genre into interesting new directions.

One act that has made a career out of pushing the envelope is Tristan Shone’s Author & Punisher - a band that plays within the lines of doom, drone, noise, and industrial. While Shone’s genre blending in and of itself may not be overly unique these days, the fact that he brings his vision to life by way of his own handcrafted instruments very much is, and in doing so he brings about a fitting and satisfying realisation of the term "industrial" in the process.

Like the machines that drive it, Author & Punisher’s music has been constantly evolving with each of the band’s releases and Melk en Honing (Milk and Honey), the band’s sixth, feels like a culmination of the various experimentations that have come before. This is an album that brings together the confidence 2012’s breakthrough album, Ursus Americanus, the sheer heaviness of 2010’s Drone Machines, and the sense of experimentation of 2013’s Women & Children.

Where the material on Ursus Americanus largely stayed quite close to standard rock song structures and conventions, and Women & Children saw Author & Punisher taking tentative steps into more experimental territory, Melk en Honing sees Shone spending much more time exploring the drone and industrial sides of the band’s sound with lots of protracted stretches of minimalism to be found across its running time.

But while Melk en Honing is content to spend a large portion of its time carefully cultivating an atmosphere through its almost hypnotic, droning dirges, space is made for material that has at least some semblance of the traditional 4/4 rock song, even if it’s only through an injection of a certain sense of progressive urgency in the narrative flow of the songs that fit this particular bill.

Even with this culmination of Author & Punisher’s earlier realised successes as well as Melk en Honing’s confidence and all-encompassing atmosphere, I’ve still found it to be the band’s least accessible release as well, despite the high quality of what’s been produced. The considerable length of the album (55-minutes) could reasonably be seen as a contributing factor here, but I think it’s less the heft of the running time itself and more what is done within it.

There are a lot of long songs on this album, with five of the eight spanning more than seven-minutes apiece (and one more that falls just shy of seven-minutes) which is not an inconsiderable duration to fill - especially when the material itself tends towards a certain minimalism, as it does here. Time is clearly needed in order to build and sustain any kind of meaningful musical atmosphere, so lengthy songs certainly aren’t out of place here but many of them do feel like they hang around for just that little bit too long; where all that needed to be said was communicated several minutes before the song itself had finished. It feels as though a little more ruthlessness in the editing phase could have kept the essence of what is being presented while removing a little of the redundancy at the same time.

Criticisms about the album’s arguably lax editing aside, Melk en Honing is dense, challenging, frequently rewarding, and a genuinely exciting release that captures the imagination not just because it’s great but also because it is unafraid to step away from the crutches that so many bands can’t quite seem to set aside, regardless of their genres.

It may not be perfect but the fact that Author & Punisher continues to push the boundaries with each release is more than enough to keep me coming back time and time again.