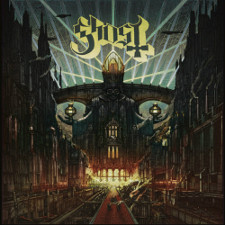 Album number three is rather important. Think about it. Master of Puppets, Reign in Blood, Among the Living. Those albums, and there are of course many more, set quite a high water mark when you think of it. Of course some bands, crash and burn after their debut, some follow suit after their sophomore release. Some manage to carve a niche, some stumble and trip with album number three and get it together down the track - Machine Head, I’m looking at you. No matter which way you look at it, album number three is possibly more important than the first two because in some way, it really helps define a band, for better or for worse. Either way, history shows that “album number three” for many bands is significant.

Ghost’s debut, Opus Eponymous, snuck up on me. I must admit I didn’t get it when I first heard it, but it didn’t take long to click with me. As far as their second long player is concerned, that is the complete opposite. Sure it contains plenty of strong songs, some of which are not what you would normally flock towards, but in hindsight - which we all know is a wonderful learning tool - I can see that Infestissumam, whilst an excellent album in its own right, isn’t really a signature Ghost album. Even then gentlest songs on Ghost’s debut are strong in various ways. That right there is the link that makes their highly anticipated third opus so damn good. Everything about Meliora solidifies what makes Ghost so damn good.

With Meliora, it’s clear that Ghost have found their calling. It has more in common with Opus Eponymous than Infestissumam. That has nothing to do with how memorable the songs are.  It has to do with the feel and vibe of the songs themselves. Simply put, the songs that make up Meliora are more up tempo, more rocking, more riff oriented, more groove oriented. If you’re a fan of their first long player, then this is also the album for you.

From the truly spooky intro to “Spirit” to the infectious groove of “From the Pinnacle to the Pit”, to the booming sounds of “Cirice” and the catchy “He Is” through to the crescendo that is “Deus in Absentia”, every track on Meliora is home run. There really is no bad track on here. Of course, that doesn’t make the album perfect, but it does set it up to be the best Ghost album so far.

No doubt this won’t be an album to change the opinion of the band’s haters. Haters will hate. Meliora won’t change that. But for fans of the band, it’s clear that this is quite possibly the group’s best effort to date. One has to ask then, “Will tracks stand up to “Ritual” and “Elizabeth”?” To answer it simple, yes, I think they do. The songs on Meliora have the memorable choruses and catchiness of the band’s debut. No doubt. The material here is just as palatable as anything from their debut long player. Listening to tracks like “He Is” and the album’s stunning finale “Deus in Absentia”, it’s clear that the band have refined their knack for crafting some truly great tunes.

Of course there will be plenty who will argue until they are blue in the face that “It’s not metal” or “It’s just a gimmick act” or “It’s just boring and unoriginal”, all that jazz. Sure it’s not “metal” in the typically aggressive style that we all know and love and yeah, they have costumes and a big production deal going on - for that matter, so do Slipknot. But, boring and unoriginal? Well, that’s totally subjective and when you look closely at it, there are many different influences going on - AOR, rock, pop, metal. The end result is a collection of catchy tracks that will no doubt have many Ghost fans praising the third coming of Papa Emeritus and Co. as album of the year. It’s not without reason, either. There’s a few months to go still but there’s little doubt in my mind that this is one of the best for 2015 without doubt.