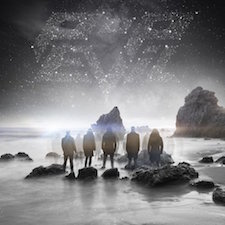 On the heels of 2013's Onyx, which spawned the three #1 U.S. Mainstream Rock singles, "Trenches", "Deal With the Devil", and "Torn to Pieces" and then "Beautiful" which was still charting earlier this year, Pop Evil is on top again with their latest release, Up.

The lead single and track that opens Up is "Footsteps". The song takes some time to build, with its 40-second intro made up of some distorted echoes and electronic effects that are somewhat difficult to describe. Leigh Kakaty's vocals kick in, then so do the drums, and shortly thereafter, the bass--courtesy of Chachi Riot and Matt DiRito, respectively. The guitar-driven hard rock element does not become prevalent until the first chorus, which has a highly memorable "woooooo" to it. "Footsteps" has a catchy pop sensibility to it, and it boasts lyrics about knowing you are destined for something greater.

"Core" follows, and with its heavy bass and big riffs, it is much more of the hard rock you would expect from Pop Evil. The lyrics "You can't hold me down / You don't own me / You're done to me," perfectly sum up the song's attitude. "Core" also has a great guitar solo with some thick bass layered on top. In a similar vein, "Take It All" has classic hard rock-inspired riffs in the intro. The repetitive "I'm comin' gonna take it all / I'm comin' gonna take it all" in the chorus leaves a lasting impression. Kakaty's vocals are aggressive, and there is also good use of backing vocals from the other band members.

Although it's not the heaviest song on the album, and it's definitely not a ballad either, "Ghost of Muskegon"--which is named after a city in the band's home state of Michigan--is absolutely my favourite track from Up. It's one of those songs that immediately draws you in, and I could see this one as a potential single. The beginning is rhythmic, with some slight electronic elements to the beat. The vocals are fantastic as Leigh Kakaty sings the chorus of "I'm just a ghost / It's starting to show / I've been on the wrong side searching for love," in such a hard-hitting and profound way.

As Up rolls along, "Lux" is the heaviest song as of yet, especially with its thick bass intro. It has a sexiness to it, as the lyrics tell the story of a likely enticing woman, "She got me walkin' on a thin line / She said 'Come come over to the dark side'." "Vendetta" shows even more of Pop Evil's metal side with its thrash-inspired opening riffs. Its verses are quite rhythmic and forceful, but "Vendetta's" melodic, powerful chorus is primed for rock radio.

"Dead in the Water" is another favourite, as it begins with bright NWOBHM-style intro riffs, followed by more bombastic modern metal riffs. Much like "Vendetta" the verses are aggressive, but the chorus is catchy and lyric-driven. The muffled vocals on the bridge are so fitting, as it cleverly simulates drowning. "Dead in the Water" is an eclectic song with many elements that mesh together perfectly. As it slowly and quietly ends, it fades into the ballads that create finishing touches for Up.

Up ends with two ballads, but they are at opposite ends of the spectrum. The first is "Seattle Rain," which is an acoustic country-flavoured track with hints of mandolin. It is unlike anything else Pop Evil has ever done, but it is beautiful and sincere. Then, with "Til Kingdom Come," the album is done. It is heavy on the bass, and the chorus is filled with the remarkable guitar work of Nick Fuelling and Dave Grahs. Although it is slower, it is still pretty heavy, and it ends at a climax of squealing guitar riffs. When Pop Evil is ready to unleash a ballad from Up as a single, I'd bet money this will be the one.

Pop Evil's Up is a diverse record with no shortage of hard and heavy rock moments--but also balanced with ballads and a touch of pop nuance. Each track is catchy and memorable, and most--if not all--are worthy of being future singles, particularly rockers "Ghost of Muskegon" and "Vendetta" and ballad "Til Kingdom Come". Since they all can't be on the radio--even though they probably should--rock fans should do themselves a huge favour and get Up.