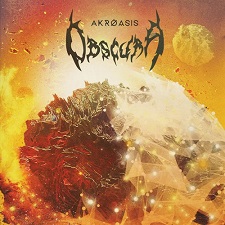 After the success of their mind-blowing and brilliant third record, 2011’s Omnivium, German technical death metal masters Obscura, led by founder and now sole original member vocalist/guitarist Steffen Kummerer, had to face some unfortunate circumstances. Essentially, 75% of his band decided to depart, starting with fretless bassist Jeroen Paul Thesseling leaving in late 2011, to be replaced by Linus Klausenitzer from Noneuclid.

In 2014 came the shock of losing both guitarist Christian Muenzner and drummer Hannes Grossmann, both previously of Necrophagist. This was a huge loss as their exceptional musical contributions to both Omnivium and its critically acclaimed predecessor, Cosmogenesis proves. The same can be said of their respective solo efforts and in particular, Hannes’ 2014 solo debut which was phenomenal. Although, their combined efforts on the Alkaloid project early last year was a hard, ambitious pill to swallow, especially in one gulp.

However, that is not to say that their initial respective replacements in Tom Geldschläger and Sebastian Lanser don’t fulfil their roles with gusto on the band’s fourth record, the aptly titled Akróasis. With a Greek title, meaning “hearing” or “listening”, this is exactly what you need to do to appreciate the rather stunning musicianship on display. Initial replacements you may ask? Well, in guitarist Tom’s case, he laid down all his guitar tracks but somewhere along the way in 2015 he was relieved of his duties and has since been replaced by Rafael Trujillo.

With all of these line-up changes in the band’s 14 year career, is Steffen becoming the Mustaine of tech-death? All jokes aside, Obscura is obviously Steffen’s vision and Akróasis still sounds utterly like Obscura, but the extreme-ometer has definitely been dialled down a touch. With less aggressive riffing and blasting, there is more spacious breathing (possibly too much?), groove and very often straight up progressive passages. At times, such as “The Monist”, you’d be hard pressed to even classify this as death metal if it weren’t for the vocals. Though don't fret, there is still dizzying fretwork and brutality a plenty as the title track will surely blind your senses and grind your bones.

Steffen continues to summon a young Chuck Schuldiner from the grave at times with his higher screams compensated by his low gutturals, although the continued use of the vocoder for that that futuristic robotic effect is hit and miss. Closer “Weltseele” is Obscura at their most ambitious to date, and at 15 minutes, you’d be hard pressed to pick much repetition or anything remotely signifying that you're listening to the same song. However, those 15 minutes fly by without realising as you’ve been listening to everything that is pouring out over this epic, classical infused composition.

While Akróasis most definitely contains the band’s most superior production and most ambitious, creative, and progressive compositions to date, it is difficult to rank against what many hail as the bands crowning achievements. Is it better than Cosmogenesis & Omnivium? No. However, it is in the same ball park as the latter, and if that tickles your fancy, Akróasis will without a doubt give you similar listening pleasure.