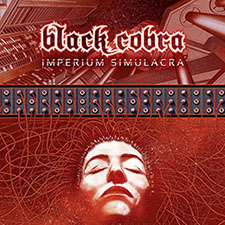 There is plenty of down-tuned, steamroller riffage and heaving tempo to soak up with Black Cobra, but also a significant hardcore thread running through the band’s sound. The inherent changeability of sludge metal and the way it can chaotically yet emphatically move between several tempo changes is not as prevalent here as you would expect to hear with full-on sludge. The duo of Jason Landrian and Rafael Martinez is a devastating mix of precision and groove however, making Imperium Simulacra an interesting listen.

This album marks the band’s fifth full-length studio release since its inception in 2001. The duo of Rafael Martinez (drums) and Jason Landrian (guitar, vocals) hails from the Bay Area which, to some degree, makes sense when you connect to the sound they produce. Apart from a significant influence of hardcore, there is that something else that adds a bit of groove and faster tempo. The blend of all of this is executed with impressive precision by these two. Sludge often does mesh together in a blur of drum blasts, screams and riffs but Black Cobra is more about measured tempo and chiselled, chunky riffs.

Imperium Simulacra is a hard-hitting album with both Martinez and Landrian going at it full tilt with their respective contributions. The drumming is laid down firmly while Landrian’s gruff yet piercingly pitched vocals bellow and whale amidst his thickly sliced riffs. Of the nine tracks put down here, Black Cobra is most convincing when limiting it to between four and five minutes in length.

“Fathoms Below” and “Dark Shine” don’t carry the impetus and fail to keep me plugged in. Whereas with shorter, punchier numbers like “Obsolete” all the good stuff is squeezed into less than three minutes and is definitely one of the stronger tracks. Admittedly, and while not a direct criticism of Landrian’s vocals, the most appealing passages on this album are when it is just instrumental. It is here when the songwriting flourishes and all the juicy bits of sludge and hardcore punk blend beautifully together. Just take the very first minute of the entire album on “Challenger Deep” – a bloody solid opening.

The title track kicks off with some drumming far too reminiscent of Lars Ulrich in the St. Anger era which is a bit off-putting. Luckily the song quickly moves on and unfolds a bit more. “Eye Among the Blind” has a very determined and monotonous tempo – very mechanic like a Ministry song and it struggles to move beyond this. In this sense, all the hype created with “Challenger Deep” wears off a touch and only gets a kick in the nuts when “Obsolete” chimes in. As you near the end of the album, there is a sense that there is a potent recipe at work here, but with the shortfall of not enough flair. There simply aren’t enough memorable moments.

Imperium Simulacra is executed with precision and force, and the blend of sludge and hardcore punk is a catchy one.