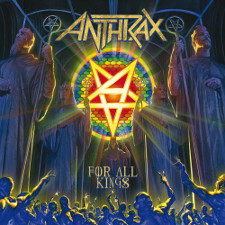 I must admit I’ve been sitting on this album for some time now. For All Kings, studio album number eleven for this long standing New York (U.S.A.) metal act, honestly didn’t sit well with me for the first little while. Of course, it’s very much Worship Music part two, or probably more fairly, a clear cut continuation of the vibe, style and sound that made Worship Music one of the best albums of 2011 for me. In saying that though, my initial impressions of For All Kings were not positive. Where am I going with this? Well, like this review, this album is one that will need some patience.

Since we last heard from Anthrax, thankfully, the band’s line-up has stabilised with guitarist Jon Donais cementing his place along the long standing members of the band after replacing Rob Caggiano in 2013. Whilst the band’s previous long player had some up tempo numbers that were clearly some of the album’s brightest moments, any interest in returning to the band’s glory days of the mid to late 80s, is never on the cards. Whilst I, and others, may have come to terms with this, the band’s current direction does not sit well with some.

Anyone who knows me knows how highly I rate those early Anthrax albums, in particular Among the Living which in my eyes is absolutely flawless. I kinda grew up with Anthrax and the big four. Anthrax was always the fun band of that lot and that was a big part of their appeal for me. The band has come a long way since then and their ups and downs are well documented. With the return of vocalist Joey Belladonna to their line-up in 2010, Worship Music was a strong album that showed a balanced mix of aggression and groove, which brings me to the band’s newest one, For All Kings.

A sombre march (dubbed “Impaled”) ushers in the album before guitars fade in and the album’s first real track, “You Gotta Believe” kicks into gear. The mix is typical Anthrax – drums and guitars up front and centre, and Frankie Bello’s rumbling, finger picked bass lines providing a solid underpinning alongside drummer Charlie Benante. However it’s clear that Anthrax have taken a more melodic and less aggressive approach to things this time around. For All Kings feels like it has a bit more of a Sound of White Noise influence throughout. There are some really infectious hooks and choruses across the thirteen tracks here. Just listen to the killer chorus of “Monster at the End” and the all-round-excellent “Breathing Lightning” to see what I mean. They really will go down a treat live.

For the most part, the rest of For All Kings holds up well. It’s generally strong on average but not without its faults. I think the biggest thing that affected my take up of this album is the hour long run time. Now I’m sure some will say, “Au contraire!” and be quick to point out albums such as Metallica’s Master of Puppets and Anthrax’s Among the Living that both have lengthy run times, too. No doubt. But those albums are all killer, no filler. For All Kings feels a little long winded at times, and it’s clear to me that just like Metallica with 2008’s Death Magnetic, Anthrax too could do with a healthy dose self-editing and self-control here. The dark, pedestrian paced “Blood Eagle Wings” and the bland rock number “This Battle Chose Us” easily fall into the filler bucket here.

Let’s be straight - For All Kings will not change the minds of those already disenchanted with Anthrax at this point of their three and a half decade long career. This may feel and sound very much like Worship Music part two and truth be told that is a logical next (safe?) step for the quintet. Worship Music may have a more aggressive edge over For All Kings but I think this one has more memorable songs, including what could be their best since “Only” (from 1993’s Sound of White Noise) with “Breathing Lightning”. Unfortunately, the filler and weaker back end drag the end result down by a couple of points. My score would have been a bit higher if these guys could self-edit better. That aside, For All Kings is a worthy follow up album and one that will sit very nicely with fans of the band’s previous effort.