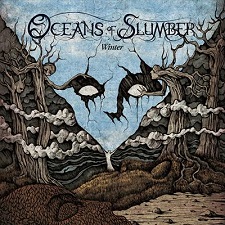 2016 has already delivered some cracking releases by well-established bands in just barely two months, but I’m here to tell you about a less established band, and one that is unlike any I have heard before. Oceans of Slumber, a sextet from Houston, Texas, led by the gorgeous female vocals of Cammie Gilbert are not your typical female-fronted metal band. Remove all thoughts of another Lacuna Coil or Within Temptation, this is not Nightwish and is most certainly void of any of that latter day Arch Enemy.

This band has more in common with death and grind, thanks in no small quantity to drummer Dobber Beverly from grindcore act Insect Warfare, Norwegian black metal pioneers Emperor and even a little Mandylion/Nighttime Birds-era The Gathering. While their 2013 debut Aetherial was void of vocalist Cammie’s talent and predominantly driven by the harsh and clean vocals of former vocalist Ronnie Allen, it was their 2015 Blue EP marking her official recorded debut. This showcased an array of inventive covers including Candlemass, Emperor and even Pink Floyd, plus a couple of new, however simple songs.

Mixed by Russ Russell, whom has produced every single Napalm Death record since their unstoppable return to form with 2000’s Enemy of the Music Business (yes, that guy), it is on their sophomore effort, Winter, where this band has truly come into form. Opening with the exceptional title track, you’re taken on an ethereal journey of loss and icy bitterness. Cammie’s soaring, angelic yet powerful voice is complemented by an onslaught of vicious screams and roars, culminating in a ferocious black metal infused, blasting furnace, just shy of eight minutes.

“Winter” is definitely one of the best songs this record has to offer, however that is not to say that the ensuing tracks are subpar. Quite the contrary. “Devout” and “Nights in White Satin” are all delivered with passion, intensity and conviction and the heaviness and brutality is brought via the riffs and harsh vocals shared across guitarists Anthony Contreras, Sean Gary and bassist Keegan Kelly, all covered by a layer of keys and synths courtesy of Uaeb Yelsaeb. The drums also sound absolutely fantastic and for lack of a better word, real.

Five of the 13 tracks are short interludes that unfortunately do disrupt the flow of the record. After removing these, I can honestly say this makes a much more complete and rounded release that ebbs and flows almost seamlessly. Just listen to the album's most crushing moments in “Apologue” and what could have been the perfect closer “…This Road” as it perfectly fades out, yet it is followed up by the piano led, instrumental closer “Grace”.

Minor negatives aside, Winter is still a fantastic release by a band that deserves some serious, undivided attention. They’re not reinventing the metal wheel, though I will tell you one thing, Oceans of Slumber aren’t exactly doing what everyone else is doing, and that, my friends, is a very nice breath of cool, fresh air.