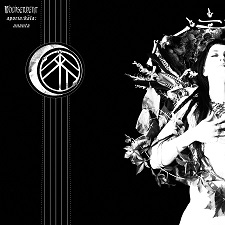 It’s funny how a band’s name can predispose you to an assumption about what they’ll sound like even before you’ve heard a single note. In the case of Boise, Idaho’s two-piece act, Wolvserpent, I’m not really sure what I expected them to sound like, but when their second full-length album, Perigaea Antahkarana, was serviced to me a couple of years back, I let it pass me by without so much as a download for no other reason than the name not jumping out at me. This, it turns out, was a big mistake.

Two and a half years after Perigaea Antahkarana, Wolvserpent are back with a new EP entitled Aporia:Kāla:Ananta, which was actually written way back in 2007 and recorded in 2014. It comprises a single, 40-odd minute song that seamlessly blends together rich, classically-inspired strings with earth-shattering drone and doom across a series of distinct movements (which I’m assuming relate to the three parts of the EP’s name, though I could be completely wrong about that).

To those who usually shy away from drone or doom, I can’t really say that Aporia:Kāla:Ananta will necessarily be the release that will make you change your mind because it still requires patience and a certain amount of dedication to digest - especially in its single, lengthy track format. What I will say, though, is that this EP is far less impenetrable than many, many other releases that fall under the same genre umbrella, and this is, I think, because of the attention to detail band members Brittany McConnell and Blake Green have paid to shaping a real narrative out of their material, rather than just crafting a long composition that ticks off the relevant genre-related boxes.

Aporia:Kāla:Ananta begins with almost exactly seven minutes of slow, strings-based build-up before the first major movement begins. This particular movement is the EP’s fastest and features a heavy use of strings set atop a consistent blast beat with a punctuating rhythm provided by the kick drum, and with guttural vocals that are placed very low in the mix, almost operating more as a textural element than vocals in the traditional sense.

The second movement, arriving some 12 and a half minutes into the composition, is the EP’s most classically-inspired and is also its most beautiful. It features an infectious, almost film score-like violin melody that has a way of folding in on itself such that its repetition across the movement’s four or so minutes is easily overlooked. McConnell’s restrained drumming with its tom-heavy beat provides the perfect accompaniment through its relative subtlety and its ability to ground the violins in an almost hypnotic rhythmic structure.

Things take a sharp turn as the delicate strings of the preceding sections give way to feedback-drenched, down-tuned guitars and thundering drums in the third and final movement, which is also the EP’s longest by some margin. Here Wolvserpent channel the crushing drone and doom of a band like Monarch! while also incorporating varying degrees of melody which sometimes brings to mind the more melodious side of Bloody Panda. It is in this part of the EP that things get really interesting.

While the drone/doom combo that Wolverspent offer up is as heavy and foreboding as any fan of the styles could hope for, what really does it for me is the way the band manages to work in different elements such as sound effects and synths to add an entirely new dimension and depth to the otherwise crushing sense of despair that the riffs evoke. This is something that I think will make the proposition of consuming such a dense composition a little easier for people who normally avoid this kind of thing; it isn’t quite as minimalist as a lot of the drone/doom out there and there’s a bit more to sink your teeth in to up front without having to really work for the payoff like you otherwise might with bands of a similar ilk.

It’s taken three months for me to find a release that I’ve been truly in awe of this year, but I’ve finally found my first one in Aporia:Kāla:Ananta. If drone and doom are your things, then I can’t recommend this EP to you strongly enough. But even if these genres don’t really do that much for you generally, I’d still encourage you to give Aporia:Kāla:Ananta a run because the quality speaks for itself and you may just find yourself being as taken with it as I am.