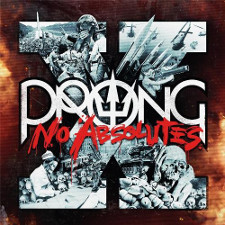 Whilst some acts such as Metallica feel the need to take their time when it comes to writing and releasing albums these days, others such as Revocation and Prong churn them out in almost rapid fire succession. The native New Yorkers, since 2012, have just put out their third long player, dubbed X - No Absolutes . Now that might not sound like much, but they’ve also unleashed a live album (Unleashed in the West - Official Bootleg - Live in Berlin) and a covers album (Songs from the Black Hole) as well. That’s a pretty solid work ethic when you consider the band were on the road as well during that time.

It’s typical to be cautious of the output quality when the work rate is that high. It seems that when Prong are on form, it really shines. There’s no better indication of things going right for the trio than the stomping first track, “Ultimate Authority”. Founding member, vocalist/guitarist Tommy Victor is totally on point and it shows. Everything about this track crushes from the off kilter riff that drives the verses to the huge chorus. No doubt this would sound even more intense live and would make a great opening track in the live arena. “Sense of Ease” is an absolute cracker of a track. Victor and Co. really put their foot flat to the floor in every sense here producing the albums most intense cut.

It’s not all peachy though. What stands out like a sore thumb though are the wishy washy “Do Nothing” and “With Dignity”. If they weren’t on a Prong album, you’d never recognise these as Prong at all. Both sounds more like generic radio rock than Prong and no matter which way you look at it, they are bland and uninteresting tracks with very little life to either of them. “Ice Runs Through My Veins” is saved only by its solid chorus.

For all of the trademark Prong elements that X - No Absolutes has to offer, the melodic and infectious chorus of “Without Words” almost makes it the album’s most accessible track. For the most part, the rest of the album is very much business as usual for Prong. There’s no real surprises either way which is a good thing. There’s plenty of attitude and aggression throughout the album mixed in amongst catchy hooks and angular riffs.

Behind Victor’s riffs and biting vocals, full credit must also be given to the tight rhythm duo of bassist Jason Christopher and drummer Art Cruz. Whilst Prong might always be viewed as Victor’s ship to steer, there’s little doubt that the work of this dynamic duo are a big part of what makes this album just so damn rock solid.

At just over 44mins, X - No Absolutes is a relative compact album that doesn’t feel long at all. It’s interesting to say that given how much the aforementioned sour points really offer nothing at all. This would be an even stronger album if they were culled from the final product. But it is what it is and X - No Absolutes stands strong as a Prong album that will easily satisfy fans as it delivers everything they want and expect from this long standing act.