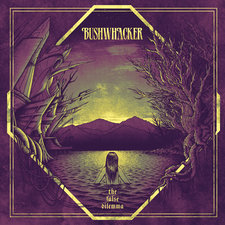 While I’m not quite sure what’s in the name, as a bushwhacker links to the American Civil War and these chaps are from Canada; one thing I did come to understand about The False Dilemma is that it requires a few listens to begin to absorb what’s going on here. Then again, bushwhacker could simply refer to the wilderness in general terms which would make more sense as the band is originally from The Yukon. Either way, bugger it. To the music.

What ultimately came to impress me most about Bushwhacker here is how visceral their sound is on top of echoing a fair array of influences, both old school and contemporary. The vocals (lead by whom isn’t quite clear from the bio), are predominantly quite gruff, which throws your mind straight into metal, but musically there’s much more to it. When you listen to songs like “The Return”, you do see why associations are made with the likes of Tool – more mantra-like vocals, rhythm, and winding guitar - but the rest of the album speaks more of psychedelic rock and 1970s to 1980s hard rock and metal. Mention has been made of bands like Death and Carcass, but I personally don’t hear a lot of death metal – hints of black perhaps, but not death metal.

Bushwhacker hasn’t fluffed up or heavily coated the production of this album either; rather keeping the sound stripped down which suits them. Cavan Egan (guitar, vocals), Geoff Woods (guitar, vocals), Rory O’Brien (bass, vocals), and Sean Komaromi (drums) keep things simple in that they let the instruments and their song-writing do the talking. And even with all the different influences at work here, there is very good balance to The False Dilemma. It never really seems to lull or drag on. The diversity works.

Just when you think there is truth to associations made with Tool, Mastodon, Machine Head, and co. the album switches up. As strong a track as the opener “The Tower” is, it somewhat throws you because what follows is a more profound indication of what Bushwhacker is capable of. “Dead Man’s Waltz” is a heaving hard rock monster – rumbling, building up momentum and crashing in waves of riffs, hooks, melody, and grit. Nearly eight minutes seem to glide by. There is that technical side to this song with complex rhythm change-ups and guitar wizardry thus attracting comparisons to Mastodon, but there really are more classic influences embedded within the band’s sound than simply progressive rock.

The creative element to Bushwhacker’s song-writing is what often takes you by complete surprise. The middle passage of “Shikadance” begins with a devastating breakdown, unravelling into a captivating to and fro between catchy riffs and solos on guitar. Songs like this are dynamic, layered and purposeful. “A Path” ushers in the last part of the album, showing more that progressive rock side – soulful and instrumental like Scale the Summit. This instrumental side is a definite strength of Bushwhacker’s as the title track proves with barely any vocals playing a part in the song’s five minute duration. “Golden Shell” is a strong closer; once again demonstrating how this band mixes things up by laying the black metal on thick, but never quite dispensing with good melody and catchy rock elements.

Initially unaware of Bushwhacker’s existence, I for one will certainly remember them following this release and anticipate what they do next.