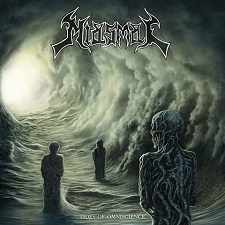 Solid, quality, old school classic sounding death metal is hard to come by these days. With the exception of physically reaching for the Tampa classics in Death and Obituary, or that petrol fume drenched, chainsaw guitar sound of such Gothenburg legends as Entombed and Dismember and the obvious others, no one is really doing it like they used to. Hell, even the few classics that still have a pulse, in some form of a desecrated line-up or other are falling short of the mark; yes, I’m talking about you Entombed A.D.

If your death metal heart is feeling the same way and craving that original high you remember when first discovering some of the aforementioned bands either back in the day or during the genre’s peak, your fix has been found in the form of Gothenburg’s Miasmal and their third record, Tides of Omniscience. Here, the melodic death metal heart is beating hard and fast enough to pick up the slack of many others and their short falls in recent years.

The guitar tone of this record is sick. Old school buzz with just enough modern crunchiness. The thick and full sounding drums opens this beast of a record as "Axiom" kicks things off with rolling snare and tom work, followed by some serious chugging groove. Then enters the venom dripping, blood gargled vocals of vocalist/guitarist Pontus who seems to have come up with the perfect combination of the recorded debuts of such legends as Chuck Schuldiner (Death), John Tardy (Obituary), and Tomas Lindberg (At the Gates) and made it his own.

From the get go, the song format is essentially the same and rarely do any drastic changes in pace occur. Sure, there is some slower, creepier moments such as "Perseverance" and also closer "The Shifting of Stars", both showcasing some nice acoustic work. The overall guitar work and searing lead breaks is killer and has such a '90s Swedish, eerie vibe that takes me back to when I first discovered such music. The aforementioned "Perseverance" and "Dark Waters" truly captures this. There is also enough blast beats and double bass work at just the right times to not give you an aneurysm as some more technical and brutal artists can induce.

If you’re after ten absolutely solid death metal tracks, one after the other with excellent replay value and reminisce about the glory days of Swedish and classic death metal, look no further than Miasmal’s Tides of Omniscience.