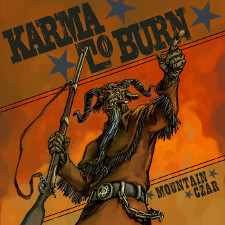 I’m old enough to remember when “stoner rock” was a new thing. I’m talking about being there when Kyuss released album after amazing album and being lucky enough to see them in concert support Metallica on their 1993 “Black” album tour of Australia. I was there when Kyuss folded and morphed in one way or another into Queens of the Stone Age. As this movement was gathering momentum, Roadrunner Records put out a compilation appropriately titled Burn One Up in 1997, and that was my first introduction to Karma to Burn. Sure enough, as catchy as the track “Ma Petite Mort” is, I always found it interesting that the vocals offered very little to the track.

After their debut self titled album from 1997 was released, the band soon fired vocalist Jay Jarosz and Roadrunner released the group from their contract. From that point on until mid 2002 when they disbanded, the band only released instrumental albums. They reformed in 2009 and virtually continued on their merry way with only 2011’s V being the band’s only other album to feature vocals to this point. Over the course of their career, they have continued to bounce from label to label, and now, the band have landed with long standing European label Steamhammer/SPV for album number seven, titled Mountain Czar.

True to form, the instrumental tracks on Mountain Czar are numbered as opposed to named. This album, which consists only of five tracks, is on the short side clocking in under 24 minutes, it almost feels like an EP more than anything. But I digress. The opening cut, “Sixty-Two” settles into a fat, driving groove with riffs so thick, you could carve ‘em. That shouldn’t surprise anyone who is a fan of K2B and each of the four instrumental tracks that make up this release do conform to a consistent and successful formula that results in killer, meaty tracks chock full of stoner rock goodness. Instrumentals can often be challenging as far as keeping ones attention but these guys have a God given knack for making it seem effortless as each track is equally engaging.

The EP’s real surprise comes in the form of “Uccidendo Un Sogno”. It’s a surprise for two reasons. Firstly, the female vocals courtesy of Stefanie Savy; secondly, those vocals sung in Savy’s native Italian language, and finally, the song it’s self is a fuzzed up, extra rockin’ cover of the classic Tom Petty & the Heartbreakers cut, “Runnin’ Down A Dream”. The music seemed familiar upon first listen - everyone should know that riff - but it wasn’t until after a few more listens that it really rang through. It’s a fantastic cover and a pleasant curve ball as well.

Mountain Czar is typical Karma to Burn really and I don’t mean that in a bad way. These guys rarely disappoint. Whilst this is only a short release, it certainly leaves you wanting more and if this is anything to go by, then their next release is sure to deliver the goods as well. Burn one up indeed!