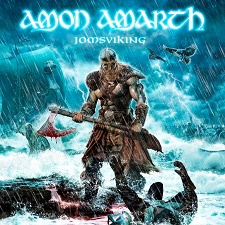 There are some bands which are synonymous with a particular genre of music.  In the case of what could be called “Viking Metal” - a combination of melodic death metal focussed largely on tales of Norse war, warriors and Gods - Swedish four-piece Amon Amarth stand as, arguably, the collective kings of the hill.  Over a near 25 year career, the band has released some of the beacons of the genre, including 2008’s Twilight of the Thunder God.

Their previous release, 2013’s Deceiver of the Gods gathered mixed reviews. Despite some very minor deviations on musical direction and lyrical theme/content throughout their career, Deceiver of the Gods was interesting enough while staying on the tried and true Amon Amarth path. So after three years between albums, I was interested to hear the latest output in Jomsviking.

As usual, the album art is striking and upon loading this one up into the playlist, you know that you are in for the typical Amon Amarth onslaught of skull splitting, bone crunching, beer drinking, god cursing, and fierce battles.

The album kicks off with "My First Kill", which details the trek of an unknown warrior and history of killing to protect a loved one, his subsequent banishment and life alone and on the run. The band has reportedly said that the album is intended to be a concept album about a “tragic tale of love and revenge”, the first true “concept” album in their history and it does seem that there is a loose story line throughout the album.

"One Against All" gallops along with driving drums and "Raise Your Horns" has the most kick-ass riff on the album. There are points at which a brief spoken word is interjected to give the feeling of being taken along the journey of the unspoken warrior and his joining of the Jomsviking crew.  The album closer, “Back on Northern Shores” is the usual epic finisher, but probably not as emotive as "Under Siege" from their last album.

However, while "Raise Your Horns" has a super riff, it also contains the low point of the album. The vocals in the chorus feel dull and unimaginative, with Hegg’s monotonous growl really crying out for something more, or at the very least some harmonious backing vocals, against the backdrop of Olavi Mikkonen and Johan Söderberg’s soaring guitars which would go well in a stadium environment, to be chanted along with by the gathered throng.

The production is sound and Andy Sneap has again done well.  However, despite my best efforts to listen to Jomsviking in a virtual vacuum, ignoring their previous efforts, this time around I couldn’t help but feel like “they’ve done it again, again”.

Despite the aforementioned minor deviations from the formula, this doesn’t seem to be simply a concept album.  Amon Amarth have forged a concept career and Jomsviking really just fits comfortably into the chronology. They band is firmly entrenched in the “damned if you do, damned if you don’t” category where there will be criticism if there’s no change in direction or experimentation, but criticism if they change it up, even if they do it well.  In Amon Amarth’s case, they have clearly chosen to stick with what they know, what they do well and what they know fans like.  And hell, who could fault them for that?

There’s nothing wrong with Jomsviking. Fans of the band won’t be disappointed, because it’s the typical crunching riffs and thundering drum barrage, coupled with tales of fierce warriors and battles that really get an emotive reaction and have you wanting to charge off with sword and shield on a long boat toward a battle on some unknown shore. However, it feels a little clichéd in parts and doesn’t present as compelling a case for replay as its 2013 predecessor, Deceiver of the Gods.