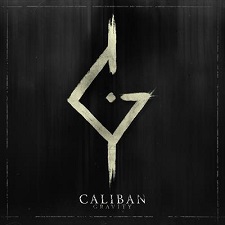 German metalcore act Caliban has been belting out records since 1999. Personally, if I had to choose to listen to a band of this particular sound, I have always preferred their native peers Heaven Shall Burn. They’re heavier, more creative, and there's no terrible clean singing.

Caliban are one of those bands, along with As I Lay Dying, that decided to attempt the Killswitch Engage sound and incorporate clean vocals, but from another band member. This started to surface around 2003’s Shadow Hearts but became far more prominent with 2004’s The Opposite from Within (provided by guitarist Denis Schmidt). Unfortunately, those vocals are still a significant component to Caliban’s sound to this day.

No less than 42 seconds into opener “Paralyzed”, Denis’ god-awful clean vocals come in and they are positioned in the mix at an annoying, mid-range level, and are layered to the max. On a surprisingly positive note, long-time original vocalist Andreas Dörner puts forth an absolutely vicious performance behind the mic. Honestly, I always found his vocal delivery so terribly forced and trying so hard to be something he wasn’t so it's good to see something has progressed.

I believe Caliban’s recent output has shown a return in the heavy department, and Gravity is heavy but so overly compressed, it simply does not sound real. Based on their current guitar tone and techniques they’ve employed in their sound, I would say they’re again making an attempt at what every single other band is doing nowadays: playing palm muted riffs, some polyrhythms, and ever predictable melodic shouted/clean sung choruses like “Who I am”, “Crystal Skies” and “Walk Alone” that fail to succeed in my ears.

By the time we get to what I assume is an attempt at a ballad in “brOKen”, the cringe factor is at an all-time high. I have not been able to listen to this song since due to the volume of cheese it contains and “For We Are Forever” contains some of the cheesiest singalong lyrics I’ve heard in many a year such as “put your hands together, hey, hey, for we are forever”. The record is also packed with guest vocalists across the metalcore scene which will no doubt satisfy the diehards as they eat up every ounce of this and lick the plate clean.

There are definitely moments of heavy awesomeness such as “Left for Dead”, but these are few and far between due to the all-encompassing mundaneness that Caliban and every man and his dog are spewing forth every other pancake day. The thing is with gravity, what goes up, must come down and in the case of Caliban’s very own Gravity, it is that heavy with nothingness, it has fallen through the crust of the Earth and out of sight.