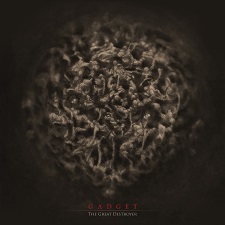 Gavle, Sweden grindcore troupe Gadget has just released their third full length record, aptly titled The Great Destroyer. Their 2004 debut Remote was a modern slab of grind for the new millennium, as was its excellent successor, 2006’s The Funeral March. Then, all fell quiet on the Northern front, and so it did for the next ten years I might add.

With the exception of time, not a lot has passed since we last heard from throat ripping vocalist Emil Englund, guitarist/vocalist Rikard Olsson, bassist Fredrik Nygren and drummer William Blackmon whom have formed the nucleus of Gadget since 2002. Much like their beloved and sadly defunct Swedish brethren, Nasum, whom are a personal favourite of mine, Gadget simply does not pussyfoot around, not once, and return with a 17 track slab of skin peeling grind.

Like a foot to the throat, “Enemies of Reason” crushes your larynx in just 56 seconds of pure grinding fury. What is ten years when you return with an opener like this? Welcome back, lads. Welcome back. “From Graduation to Devastation” brings back those Nasum cravings as does the likes of the absolutely relentless “Känslan (Post Patch Anxiety)” and “The 02666 Heritage”.

As you struggle to find your face, after having been ripped off and thrown to the corner somewhere, you immediately recognise an unmistakeable growl. Without even reading the credits, you know that none other than Barney Greenway of grindcore pioneering legends Napalm Death is ripping through “Violent Hours (For a Veiled Awakening)” with the excellent lyrics of “fiery red burning hearts, blackened deathly flags of hate”.

The pace of The Great Destroyer simply does not let you breathe until track 11 in the form of “In the Name of Suffering”. A heavy, brooding beast with an appropriate title that I find rather comical considering the aural (yet enjoyable) suffering you have just been put through in barely 15 minutes. It is one of only two songs just over two minutes, while the balance all clock in less than two, some even one. But of course, anyone familiar with this fantastic, pummelling genre knows that such lengths are more than sufficient.

Closer “I Don’t Need You - Dead and Gone” clocks in at five and half minutes and I honestly expected this to be a much slower, more sludge and doom based crusher, but alas, it’s more pure grinding affair for two minutes and brought to a close with some heavy, groovy atmospherics. With The Great Destroyer, Gadget has done their job, effectively and efficiently. Now press play again if your ears can handle it.