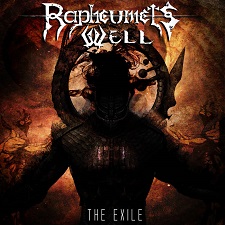 I’m a massive fan of bands that combine bombastic orchestral flourishes with heavy music, whether it be the female fronted gothic wonder of Nightwish or Epica, the blackened extremities of Dimmu Borgir or Cradle of Filth, or the sheer brutality of Fleshgod Apocalypse. Then there are bands that take things even further out into left field. There was a band called Ovid’s Withering going around a few years back who were quite amazing, fusing all manner of different elements into their extreme orchestral metal sound. This band had some serious issues with one of its members and its future is unclear at this point.

So I’ve kinda been looking for another band of a similar ilk, and I think I’ve found it. While Ovid’s Withering and US sextet Rapheumets Well are certainly distinct from each other in a lot of ways, they share many elements as well, right down to the obscure and enigmatic band name.

Both certainly employ a barrage of symphonic noise to enhance their epic metal sound, and neither fit into a convenient genre box, whether it be ‘black’, ‘death’, ‘gothic’ or any other distinct classification of metal, beyond the rather undefined ‘extreme’ category. They actually touch upon all of those sub-genres, and plenty more besides.

There is also enormous fat grooves, blistering blast beats, frenetic double bass drumming, more ambient moments, parts that sound like movie soundtracks and all other manner of madness and mayhem.

Rapheumets Well is one of those bands that smash boundaries and don’t allow themselves to be constrained by tradition or the forthright opinions of narrow-minded metalheads. They are the type of band that extends a defiant middle finger at convention and throws everything including the kitchen sink at their music. And the vast majority of it sticks with super glue.

If this band thinks some operatic female vocals might enhance the sound, they do it. Choral arrangements? Shit yes. If they want to add some electronic touches, they say ‘why the hell not’. Walls of washy synth? Absolutely. Non-traditional instrumentation? Hell yeah. And if the metal elitists, who believe that metal must only be guitar, bass, drums and dirty male vocals or it’s not allowed to call itself metal, don’t like it, then tough titties to them. They miss out on much enjoyment.

And there is much enjoyment to be had here. All the enhancements in the world amount to nothing if the songs, musicianship and production aren’t up to scratch. The songs on this album take the listener on a wild and cacophonous journey into an extreme metal utopia and the musicianship is insanely, ridiculously dextrous and precise. My only slight beef is the drum production, which is a little on the wrong side of too processed sounding. I suppose that’s what’s required to cut through such a maelstrom of sound.

The Exile is one hell of an intense and adventurous ride, and one that must be experienced if you dig on metal that is several steps to the left of centre.