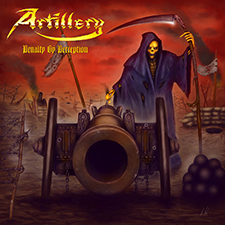 A band significant enough for its role played in the early days of thrash metal, Artillery is still around and has also survived two significant break-ups. The Danish thrashers unleash their seventh full-length studio album and fourth since their reformation in 2009. With the band inactive between 1990 and 1999, and then again from 1999 until 2009, changes in personnel were inevitable. The thrash veterans currently consist of Michael Bastholm Dahl (vocals), Michael Stützer (guitar), Mortan Stützer (guitar), Peter Thorsland (bass) and Josua Madsen (drums) – but, there is nothing long in the tooth about them with their revved-up riffage, super charged rhythm and waves of melody. There is apparently no slowing down for Artillery and certainly no signs of old age or fatigue.

With the Stützer brothers the last of the founding members, that foundation of riffs is still very much intact; preserving that rhythmic flow of thrash always associated with Artillery and bands like Megadeth from the same era. And thanks to Soren Andersen and Medley Studios, Penalty by Perception is a walloping mass of neck and cranium punishment. Those who enjoy their thrash with a bit of grit won’t find that here – this is a tightly packaged bomb of hooks and catchy tempo. The brotherly duo making up rhythm and lead guitar are relentless and really set the bar to which Thorsland and Madsen more than aptly raise themselves up to meet. Bastholm Dahl is very comfortable behind the mic, demonstrating great range and power.

With an almost Wild West sounding beginning to the opening track “In Defiance of Conformity”; the silky yet thickly sliced riffs soon follow and within these first six minutes of Penalty by Perception, Artillery bring forth a host of their experience and songwriting talent. The title track is very memorable and filled to the brim with hooks, guitar solo wizardry and a very catchy chorus. This pattern actually continues throughout the first half of the album – a blizzard of melodies and an electric storm of guitars. “Mercy of Ignorance” is another gem of a thrash song and “Sin of Innocence” has that mystical, epic feel to it. Then the breaks are put on hard with that one ballad song so many thrash albums feature. If it’s a “Fade to Black” then fine, but it needs to hit the mark. “When the Magic is Gone” unfortunately falls short in this regard and Artillery then take a while to get back up to speed as it were. There is a levelling out in the songs that follow with a slight lull in the creativity that the album started out so well with. “Welcome to the Mindfactory” perks things up right at the end and almost reinforces that slight lack in continuity when looking back at all eleven songs.

It’s bloody impressive to listen to a band formed in 1982 still thrashing like this and doing so with loads of creativity and energy. This is a fine effort from the Danes and testament to keeping thrash alive and kicking.