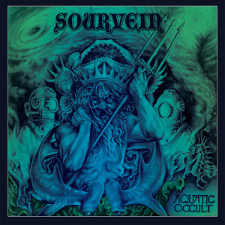 Guitarist/vocalist T-Roy of Cape Fear, North Carolina fuzz driven sludge doom rockers Sourvein has been through a lot in the last 20 years. He’s kicked the bottle, twice, lost friends and family along the way, bounced from label to label, splits to EP’s, city to city, state to state, coast to coast, to finally wind up back where it all began; Carolina Beach. To top it all off, Sourvein have recently signed to legendary record label, Metal Blade Records. The result is album number four, entitled Aquatic Occult.

A lot of hands have jumped on deck to assist T-Roy with this one such as members of Amebix, Iron Monkey and Corrosion of Conformity to name a few. Reed Mullin and Mike Dean from the latter have contributed immensely, with Reed performing drums across almost the entire record except four songs and Mike producing the record. Now, I’m pretty partial to many things of the Southern fried, heavy, rocking variety. T-Roy most definitely believes every word he spits forth in venomous vulgarity, and is a semi-competent vocalist while belting out the fuzzy riffs.

But, these are primarily the two things that for me are off putting and potentially hinder the records success. That and the plodding pace of almost all 14 songs with relatively short run times that offer hardly any memorable moments, be it vocally or musically. That is with the exception of Lamb of God’s Randy Blythe lending his infamous roar and spoken words to the track “Ocypuss” which is by far my favourite track and unfortunately, the only real stand out moment.

Randy has also written the latest biography for Sourvein, found on the Metal Blade Records website which is quite an interesting and informative read. It most certainly tweaked my interest with the statement “heavier than a two-ton anchor” and when thrown into the sea with a Brad Boatright (Sleep, Yob) mastering job, Aquatic Occult had the potential to be aurally crushing. Alas, the guitar tone is simply fuzzed up to eleven and lacks the weight this record deserves, at least from my perspective.

This is my first exposure to the band and I guess I just wanted something out of this that was potentially not the objective to begin with, which I can accept and I can always look elsewhere to satisfy my expectations. I dug the band name and wanted to review it but I just can’t quite get into Sourvein. I most certainly want to, but there is something missing and unfortunately it has all left me just a little sour.